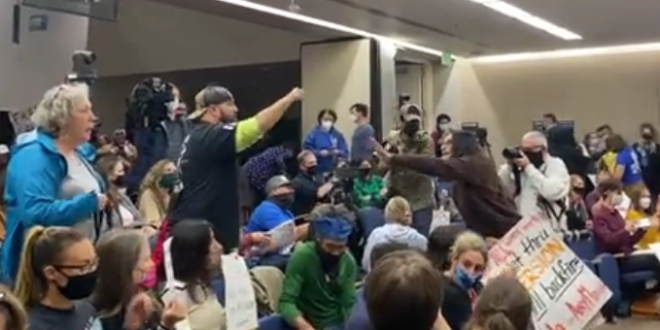 Protesters against student vaccine mandates, along with anti-maskers, forced a Portland Public School Board meeting to take place virtually, as the board was set to discuss a possible COVID-19 vaccine mandate for students 12-and-older.

The meeting drew a crowd of at least 100 parents and students when the Board Chair decided to move it online after upwards of a dozen people in attendance refused to put on a mask.

“It was upsetting to see that parents basically took away the voices of students in an in-person setting” Lincoln High School senior Xander Levine said.

“I will not sit down,” one maskless attendee of the meeting is heard shouting at the board on Tuesday evening, calling the members “cowards.”

“It’s about freedom of choice. In Oregon we have exemptions. We have philosophical, religious, medical exemptions. That should be the end of it. There’s no reason why a school board should be mandating anything,” PPS parent Sonja Feintech told Fox 12, explaining she helped organize the large attendance.

When the board exited the room, the parents and other attendees formed a circle to discuss why they are against such a mandate, OregonLive reported. They also chanted “recall the board” and “stop the vote.”

About 75 anti-vaccine protesters protested the Portland Public School board meeting concerning a vaccine mandate for students. The meeting was adjourned and switched to a virtual platform after a number of attendees refused to wear face masks. pic.twitter.com/sQiGb7cUT7

We’re nearly at capacity at 150 people.

Some people have been turned away from entering for refusing to wear a mask.

Inside security has already been asking people to keep their masks on inside the building. pic.twitter.com/63836ySghD

One man wearing a hat that reads “shoot your local pedophile” stood up and yelled at the Portland Public School Board after they suspended the meeting due to some people not wearing masks. pic.twitter.com/iz4zEbe7Ot

The Anti-vaccine demonstration was promoted in advance by People’s Rights, a far-right group founded by Ammon Bundy pic.twitter.com/lnWBkCHskN

The anti-vaccine demonstrators haven’t left. The meeting has been suspended for 45minutes. pic.twitter.com/USBS2bNvh5

Anti-vaccine demonstrators have taken over a Portland Public School board meeting.

Officials have left the building to conduct the meeting virtually after some protestors refused to wear masks.

Far-right demonstrators are now conducting their own meeting in the building. pic.twitter.com/lbIDaMY6VX

A black security guard told the maskless woman to put on her mask,

The woman called him “boy.”

The woman then looked around and said “yeah, I said it.” pic.twitter.com/3VZZon1Q2d

Bonny says she’s a parent and a naturopathic, and she’s personally against mask or vaccine mandates.

The CDC also has a breakdown of myth vs fact here: https://t.co/X3fjNpVCf8 pic.twitter.com/St9zU70f9J