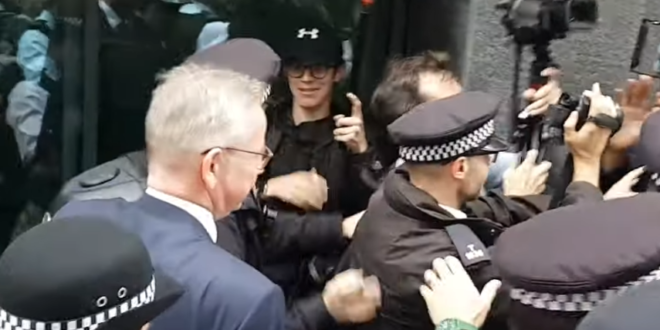 Top Tory Michael Gove has been escorted away swiftly from a protest by police after he was approached by a group of demonstrators in London. Gove, the Communities Secretary in Boris Johnson’s cabinet, was chased into a Home Office building in Westminster by what appeared to be anti-vax protesters.

Footage shared on social media showed a number of people with video cameras surround the Cabinet Minister before several police officers encircled them and moved the protesters back before guiding Gove into a nearby building. The incident comes amid concerns over security for MPs following the fatal stabbing of MP Sir David Amess last week.

The protesters were part of a march organised by groups Official Voice and GB Resistance who are campaigning against lockdowns and the vaccine. Police created a protective shield  around Mr Gove and escorted him to a Home Office building, while trying to push angry anti-vaxxers away.

The mob yelled “arrest Michael Gove” as they tried to jostle closer to him. Other insults were yelled at him by the chasing protesters and at one point a piece of paper thrown at Mr Gove appeared to briefly hit his face.

The Metropolitan Police tweeted about the incident, saying: “We’re aware of a protest in Westminster today which is marching to a number of locations.

In the second clip below, apparent QAnon nutbags scream that Gove is “protecting pedos.”

🇬🇧 Protestors confront and chant ‘do your job’ in the street to MP Michael Gove. pic.twitter.com/VPB3BiWx51