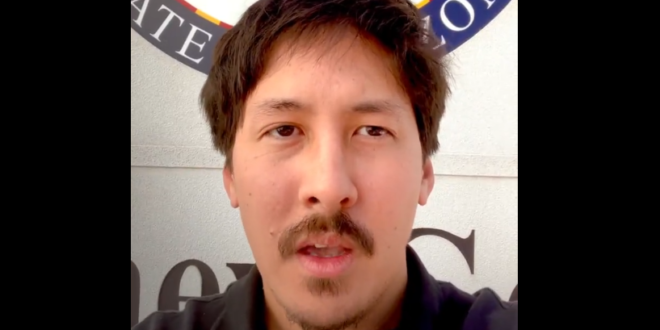 Ron Watkins, the man whose bulletin board sites hosted the postings that launched the conspiracy theory QAnon — and who some pegged as the author of the cryptic writings — announced that he was running for Congress in Arizona. Watkins, in a video posted online Thursday night, said he was aiming to unseat Tom O’Halleran in District 1, whom Watkins called “the dirtiest Democrat in the D.C. swamp.”

The video was posted to his channel on Telegram, an online messaging app that was taken up by some pro-Trump supporters after the social media app Parler was removed from online services. In a documentary, “Q: Into The Storm,” that aired on HBO in March, Watkins again denied being Q, but in a way that led the filmmaker to all but conclude that Watkins was indeed the person behind the Q postings.

He has apparently never lived in Arizona, but under election rules he must only establish residency by the time of the election.

Watch the clip, which was filmed outside the office of cultist Arizona Attorney General Mark Brnovich.

Ron Watkins, believed to be creator of QAnon, claims he’s running for Congress in Arizona https://t.co/nlRSZ6uRd2

Ron Watkins officially declaring himself a candidate for Congress. pic.twitter.com/aTwRBA6g4o