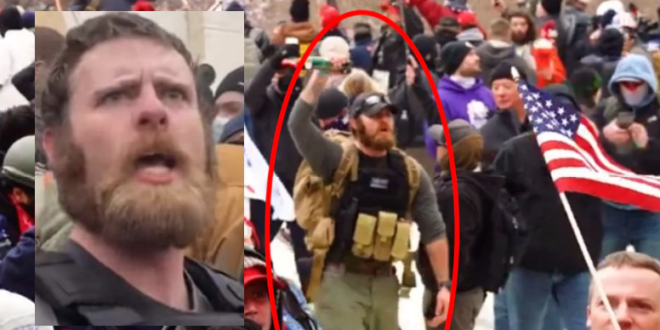 Joining a long list of accused Jan. 6 assailants, an Alabama man has been charged with pepper spraying officers and throwing a metal rod at them during the siege of the U.S. Capitol. Christian Matthew Manley, a 26-year-old from Birmingham, was arrested far away from his home on Tuesday: in Anchorage, Alaska, where he made his initial appearance in a federal district court, authorities say.

Seen in his FBI affidavit sporting a “Thin Blue Line” patch in support of law enforcement, Manley’s charging papers depict him falling far short of those purported beliefs. “CCTV footage shows that at approximately 2:54 p.m., Manley had returned to the interior of the archway and was holding what appeared to be another pepper spray canister in his right hand,” their affidavit states.

An Alabama man has been arrested for crimes related to the breach of the U.S. Capitol on Jan. 6. Christian Matthew Manley is accused of spraying officers with pepper spray and throwing a metal rod at them. Learn more at @USAO_DC: https://t.co/2DcBVGde4C