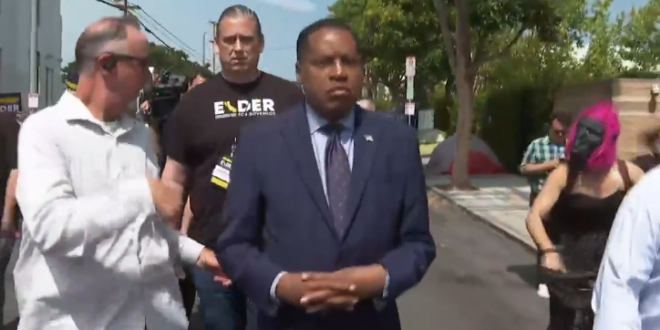 Larry Elder’s scheduled tour of homeless encampments in Venice ended shortly after it began Wednesday morning, with the leading Republican in the gubernatorial recall race hastily exiting in an SUV after being angrily confronted by a group of homeless people and advocates.

Elder — who had arrived in his new “Recall Express” campaign bus shortly after casting his ballot at a voting center across town — spent roughly 12 minutes in the neighborhood, with his departure hastened by what appeared to be an egg thrown in the candidate’s direction and a physical assault on his staff.

A woman in a gorilla mask riding a bicycle threw the small white object past Elder’s head, as seen in a video posted on Twitter by Spectrum News reporter Kate Cagle. The woman appeared to be white, Elder is Black, and ape characterizations have been used as a racist trope for centuries.

A man believed to be a member of Elder’s staff approached the masked woman, who screamed in response. The protester was then seen throwing punches at an aide who intervened. At least one other spectator got in the man’s face and hurled expletives at him. Elder was rushed into a nearby SUV and driven away from the scene. Los Angeles Police Department Officer Tony Im said the department was looking into the incident, though no further details were released.

Breaking: A flying egg narrowly missed the back of recall candidate @larryelder‘s head after it was thrown by an activist wearing a gorilla mask in Venice. A scuffle broke out and the candidate was escorted into an SUV.

Today I kicked off the Recall Express bus tour. Before we even left Los Angeles, my security detail was physically assaulted, shot with a pellet gun, and hit with projectiles. The intolerant left will not stop us. We will recall Gavin Newsom. We will save California.