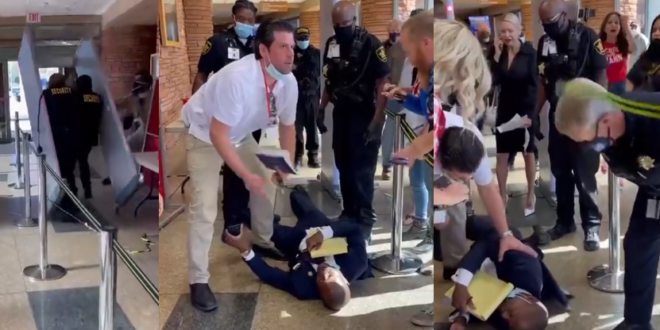 A majority of the Clark County Commission took a formal stand Tuesday against COVID-19 misinformation, declaring it a public health crisis amid concerns from other lawmakers that doing so might agitate a deep division within Southern Nevada. The 5-2 vote made the county one of few jurisdictions in the U.S. to label falsehoods related to COVID-19 — often rooted in an extreme mistrust of the government — a crisis that has prolonged the pandemic by undermining efforts to combat spread of the disease.

Often the public comment period was laden with conspiracy theories: There was talk of new world orders, a “plandemic” and Dr. Anthony Fauci funding and creating COVID-19 to kill people. One woman said the vaccine was the predecessor to a “mark of the beast shot.” A man wearing a “Jeffrey Epstein Didn’t Kill Himself” shirt questioned whether people signed up for communism through secret applications on their cellphones and hidden contracts with China.

Mack Miller, a Republican candidate for Lt. Gov. of Nevada, was physically ejected from a Las Vegas local government meeting on Tuesday. “And there’s no way that you’re going to stop me from protecting these people’s f*cking rights,” he shouted at law enforcement as he was being removed from the meeting, where he was apparently protesting. Multiple videos showed law enforcement crashing the magnetometer as they dragged Miller towards the door.

Mack Miller’s campaign site shows him at a rally with the Proud Boys. What a surprise.