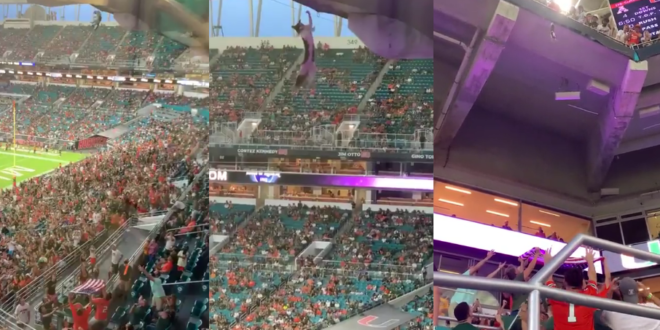 The most notable catch on Saturday during the game between No. 22 Miami and Appalachian State didn’t even happen on the field. Wasn’t even a football. It was a cat. The cat somehow got into Hard Rock Stadium, then got caught by one of its paws off the facade of the upper deck. It eventually fell to the lower level of the stadium, where fans using an American flag as a makeshift net were able to safely catch it before it was carried off to safety.

It did not appear that the cat was harmed after the fall, and the fans who caught it quickly held it up to show everyone else that the kitty was OK. The audible gasp that came from the crowd as the feline plummeted toward the 100 level was quickly replaced by cheers when it was shown to have survived the ordeal. The cat, almost certainly scared out of its mind, gave a few of its rescuers some thank you scars for their trouble.

Well this may be the craziest thing I’ve seen at a college football game #HardRockCat pic.twitter.com/qfQgma23Xm

We are happy that due to the heads up nature of fans in sections 107, 110 & 208 the cat landed safely after a harrowing fall. We wish the cat the best in his remaining eight lives.

We have made a donation to @humanemiami and encourage fans to do so. https://t.co/NAVvDYiO41