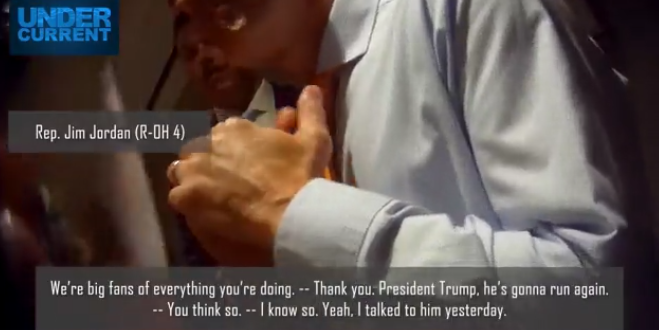 On Thursday night, Lauren Windsor of The Undercurrent reported that Rep. Jim Jordan (R-OH) told her at an event in Iowa that Donald Trump will announce a presidential run “any day now.”

Windsor’s report was swiftly denied by a spokesperson for Jordan, who told Politico, “Not true. Mr. Jordan did not say this.” But now we have learned – to paraphrase Jim Comey – lordy, there are tapes.

BREAKING: Jim Jordan told me tonight in Iowa that Trump will announce he’s running “any day now.” A big GOP operative in the state later announced to the crowd that Trump will travel here imminently. pic.twitter.com/T50ocfqnP5

Jordan spokesperson claiming the congressman didn’t say this: “Not true. Mr. Jordan did not say this.” https://t.co/sKS8lwknli

But what kind of integrity would you expect from someone who covers up the molestation of minors? https://t.co/SCMrYoy9TN

Jim Jordan: President Trump, he’s gonna run again.
Pete: You think so?
Jordan: I know so. Yeah, I talked to him yesterday. He’s about ready to announce after all of this craziness in Afghanistan… pic.twitter.com/Ndogdm7Ipl