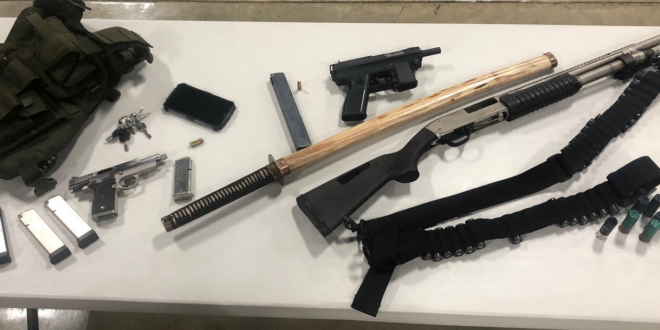 TX “Boogaloo Boi” Gets 50 Years In Threat To Kill Cops

A loyalist of the anti-government extremist Boogaloo movement who live-streamed as he drove the streets of Bowie County searching for a member of law enforcement to assassinate last year was found guilty Thursday by a Bowie County jury of the attempted capital murder of a peace officer.

The jury took less than an hour to convict Aaron Caleb Swenson, 38, of attempted capital murder of a peace officer. Swenson pleaded guilty Wednesday to charges of felony evading arrest and terroristic threatening.

Swenson spoke of searching for “flashing lights” and promised he would kill “tyrants” and “red coats.” Those terms are used in Boogaloo circles to refer to members of law enforcement.

Swenson testified that he was trying to be killed by police in April 2020 when he made the threats and never intended to hurt anyone when he streamed on Facebook Live while driving in Texarkana, Texas, that he was searching for a police officer to kill.

Texarkana Police Officer Jonathan Price testified that he was parked on a city street when he heard Swenson say he had “found his prey” and was turning his vehicle around. “I realized he was talking about me,” Price said. “I put the car in drive and took off. I didn’t want to get ambushed by myself.”

A Texas man linked to the “boogaloo” movement who livestreamed threats to kill police has been sentenced to 50 years in prison after being convicted of attempted murder of a peace officer. https://t.co/BdnyOLMpOf