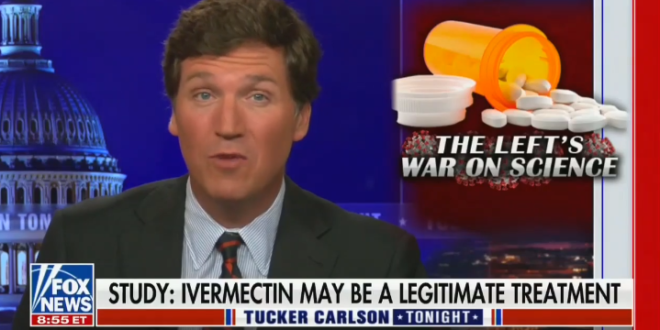 Tucker Carlson hopped back on the ivermectin train on Monday night, stopping in Quackville to speak with a psychiatrist who claimed the anti-parasite drug is also an effective treatment for Covid-19. (It is not.) The Fox News host cited a paper in the American Journal of Therapeutics suggesting that ivermectin led to “significant reductions in mortality.” What he did not mention is that the paper in question was later retracted after it was found to contain fabricated data and plagiarism.

Carlson then welcomed Dr. Mark McDonald, again, a psychiatrist, who claimed ivermectin had helped pandemic patients in a region of India. Carlson claimed – and McDonald agreed – that large chain pharmacies are in some cases refusing to fill prescriptions for ivermectin. “But you can buy Xanax by the pound,” replied Carlson, referring to a benzodiazepine which you definitely cannot purchase “by the pound.”

Tucker Carlson Laments Ivermectin Shortage With Doc Who Claims It Treats Covid: ‘But You Can Buy Xanax By the Pound’ (opinion by @michaelsluciano) https://t.co/rtena7CNeA

Tucker asks his guest, a clinical psychiatrist, to instruct viewers where to get Ivermectin if the chain pharmacies in their area won’t fill their prescription. pic.twitter.com/yszXu7cEom