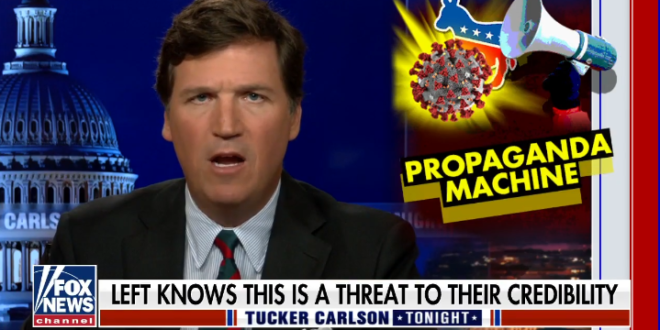 Tucker Carlson wants the supposedly swollen-testicled friend of Nicki Minaj’s cousin to come on his show. The Fox News personality on Tuesday issued an on-air plea to talk to the man in Trinidad who the unvaccinated hip hop star this week claimed, in a hotly-contested viral tweet, had suffered enlarged genitals and become impotent after receiving the shot ― and was then dumped before his wedding.

“We haven’t been able to figure out whether this show is broadcast in Trinidad,” Carlson said at the end of a 10-minute segment dedicated to Minaj’s unsubstantiated claim. “But if Nicki Minaj’s cousin’s friend is watching, or his former fiancee is watching, we want to hear your story,” he continued. “We’ll come to Port of Spain to see you. Let us know.”

Tucker: If Nicki Minaj’s cousin’s friend is watching… we want to hear your story. pic.twitter.com/RmIBCtIfC6

By next week Nicki Minaj’s cousin’s friend’s balls will be on Fox talking with Tucker and Glenn Greenwald about how liberal elites are destroying liberty pic.twitter.com/Ea1f694Bfa

It was just six months ago when they cried on-air that Cardi B’s “sinister” WAP performance was “trying to degrade our culture.”https://t.co/68ziByNl0w pic.twitter.com/30eZA6hKF2