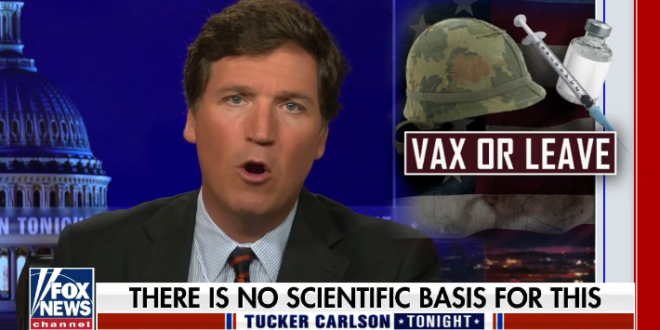 Tucker Carlson: The Military Vax Mandate Is Meant To Weed Out Christians And Men With High Testosterone

“The fighting strength of the military is young, healthy people, virtually all of them at extremely low risk of dying from COVID. In fact, to this day, only 46 members of the entire U.S. military have died from the coronavirus over the last year and a half.

“Suicides, by contrast, kill many, many times more. In just a few months last year, 156 service members killed themselves.

“So, military suicide is an actual crisis that the Pentagon might want to address. Lloyd Austin might want to look into that. But, no, that would get the Democratic Party nothing.

“The point of mandatory vaccination is to identify the sincere Christians in the ranks, the free thinkers, the men with high testosterone levels, and anyone else who doesn’t love Joe Biden and make them leave immediately. It’s a takeover of the U.S. military.” – Tucker Carlson, last night.