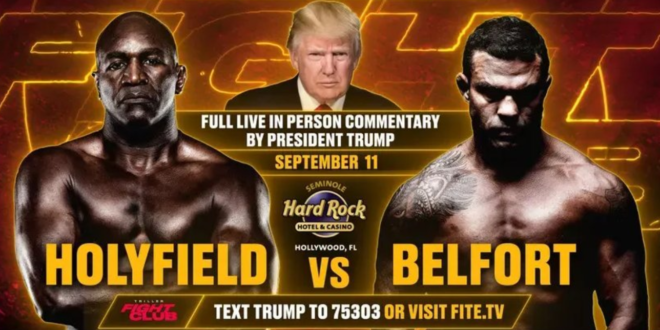 Former President Donald Trump has signed a contract to provide commentary on a “gamecast” of Saturday’s boxing event headlined by Evander Holyfield vs. Vitor Belfort, Triller told ESPN on Tuesday.

His son Donald Trump Jr. will join him at the Hard Rock Hotel & Casino in Hollywood, Florida. “I love great fighters and great fights,” Donald Trump Sr. said. “I look forward to seeing both this Saturday night and sharing my thoughts ringside. You won’t want to miss this special event.”

The Trumps will call the entire four-fight telecast that also includes Anderson Silva-Tito Ortiz and David Haye-Joe Fournier, according to Triller.

Fact check: 20 years have come and gone and there is still zero evidence Donald Trump helped “down there” on September 11, 2001. pic.twitter.com/f2T95LhSxr

Guess what Trump is doing on the 20th anniversary of 9/11?

Commentating on a PPV boxing match between two retired fighters at a casino in Florida. pic.twitter.com/0AbHNFGdc5

Trump remains on Putin’s program to defile US institutions. His new gig is to disrespect victims & heroes on the 20th anniversary of 9/11 by providing mindless commentary for an over the hill boxing match. He won’t make sense but the point is to diminish the importance of 9/11.

Former President Donald Trump and his son will be providing commentary for Saturday’s @Triller boxing event, which is headlined by the Evander Holyfield-Vitor Belfort fight.

The four-fight telecast falls on the 20th anniversary of the 9/11 attacks https://t.co/39iUncrDoz

Kevin McCarthy’s hero Donald Trump after Sept.11th, bragged about now having the tallest building in NYC, never attended ONE funeral, donated NOTHING and took federal funds that he didnt deserve. The rotten apple doesn’t fall far from the tree. https://t.co/W7fFWzrtZW

I’m not sure yet what President Biden will be doing on the 20th anniversary of 9/11.

But I know he won’t be charging $50 per person to listen to him commentating on a boxing match like Trump will be.