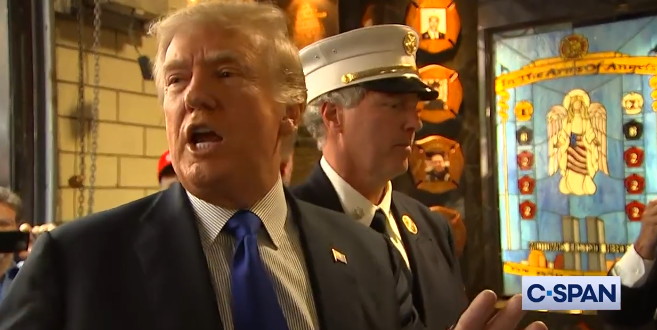 Former President Donald Trump struck a divisive tone as he visited New York City on Saturday, opting not to participate in the official ceremony at Ground Zero honoring the victims of the terrorist attacks. Trump skipped the day’s official events in lieu of his campaign-style appearance with first responders. He is also scheduled to provide commentary for a pay-per-view boxing match Saturday night in Florida.

The 45th president’s remarks were in sharp contrast to the calls for unity from President Biden, Vice President Harris and former President George W. Bush, who alluded to the Capitol insurrection and the dangers of homegrown extremists in his own remarks in Shanksville, Pennsylvania. Standing in front of first responders at the 17th Precinct station house in East Midtown, Trump said: “I’ll say it loud. You know, you’re not supposed to say that. We love the blue.”

Trump said that it’s an “easy question” whether he’ll run for office in 2024 while talking to firefighters and police officers in New York City on the 20th anniversary of 9/11.

“I think you’re going to be happy,” he added.https://t.co/K1VCVj2yzO

Former President Trump visits the NYPD and FDNY on the 20th Anniversary of 9/11:

“We’re not supposed to say it, but I’ll say it. We love the Blue.”
pic.twitter.com/Pemup3yr02

Don Jr. announcing that on this solemn day, he and his father will be announcing a boxing match and discussing: “Are aliens real and what’s up with Area 51?”
You can’t make this stuff up.#NeverForget #September11 #911attack #911Anniversary https://t.co/IvJuClhhxc

quite the screencap here pic.twitter.com/z4aVPZpUGv

Previous Boston Archdiocese Finds Priest Guilty Of Child Sex Abuse, Assigns Him To A “Life Of Prayer And Penance”
Next Southwest Extends Ban On In-Flight Booze Until 2022