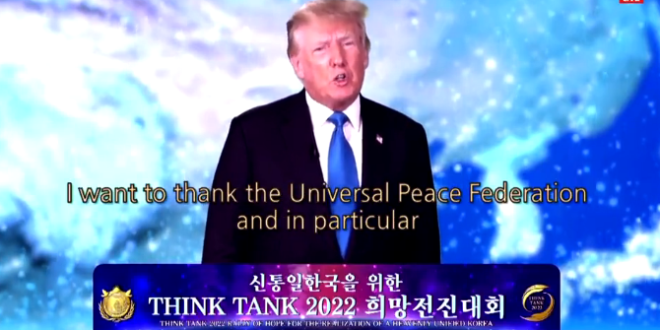 Former President Donald Trump said Saturday that America’s bold step to begin a direct dialogue with Pyongyang has opened the door to the reunification of North and South Korea and paved the way for a more peaceful world in the 21st century.

The rally, organized by the Universal Peace Federation (UPF) and the seventh such event since August 2020, drew participants from across the globe, all united in the fight against oppression, poverty and racial discrimination.

Saturday evening’s event was part of UPF’s “Think Tank 2022 Rally of Hope” initiative, designed to bring together prominent figures from across the world and across all sectors of society to examine all aspects of the unification of North and South Korea, organizers said.

The Moonies conference has started.
Here is Donald Trump praising both Rev. Moon and his wife for their “incredible story.”

Their story is they started a dangerous authoritarian mind control cult 50 years ago that is still operating.

Her son Sean deals in guns and was at 1/6. https://t.co/QYVyHCgHig pic.twitter.com/niYS5lp1xk

On the 20th anniversary of 9/11, Trump is speaking at a conference put on by Hak Ja Han Moon, the billionaire widow of Reverend Sun Myung Moon.

She is seen as a literal deity by the Unification Church aka “the Moonies” — a 50+ year old violent christofascist cult. pic.twitter.com/Z7BXRqOWt0

This is an incredible rewrite of history, in which he explains that Donald Trump, Glorious Leader, magically made the Korean Peninsula safer. 😂 pic.twitter.com/5NmaTtpluw

Here’s how they thanked Trump for his wooden propaganda:
“his precious speech”
“BRAVO”
the banners 😂 pic.twitter.com/wNVRluooP3

Just so no one forgets what we’re dealing with. This is a very tame version of the greeting the “Mother of Peace,” or the “True Mother,” usually gets.

However, you can still clearly see, this is a cult. pic.twitter.com/p90fH1adxF

OK, Mrs. Moon is creepy af.
Here she explains that “True Parents” by which she means herself and her dead husband are responsible for American success.

OK, she’s just going for it.
“Beginning on the Korean Peninsula, a new culture of the Pacific Rim civilization will expand throughout Asia and around the world.”

This just surreal. Here she says “contrary to the Atlantic civilization” by which she means, you know, the world, everything will totally awesome when the Pacific Rim civilization takes over.

[dark music] But there is a big, big catch. pic.twitter.com/5tN9ClYQER

She has extremely specific ideas about what this new peaceful unified Korea better fucking do – hint: Moonie stuff.

About Korea: “This nation cannot be a secular nation that can only focus on human interests.” Then gets much worse. Wow. pic.twitter.com/UZAGQ5FpJh

“Let us realize one cosmic family of humanity under the Heavenly Parent.”

No, I’m good with my own family you actual monster. pic.twitter.com/rYV9kus7KC

Here’s an interview with the wife of one of the “True Parents’” sons, describing his abuse and the Moon’s reaction to it.

This just scratches the surface.
The idea that any head of state, former or otherwise, would share a stage with these sociopaths is disgusting. pic.twitter.com/5jxcrmPoh4

Here’s what weddings in the Moonies look like. All of these are arranged weddings and many of the couples meet on their wedding day.

And yes, the cult leader in the crown is the same lady who was on stage with Trump, the True Parent, Mother of Peace, Mrs. Moon. pic.twitter.com/oMw7rkH7lr

I’d like to know if there’s any connection between this old NYT article about the Moonies toying with buying Mar-a-Lago and Trump speaking to the cult today. https://t.co/4YvUoNMCEw

This is pretty outrageous, even for Trump…..

Today, Donald Trump is co-headlining a CULT EVENT. The crimes of the Moonies are well documented. There is no ambiguity here.

For more on the Moonies and the modern GOP connection, read my threads below: https://t.co/DZFkBXFZW5

The churches is led by Hyung Jin “Sean” Moon, who is referred to as “King” by his followers. He wears a crown of bullets, carries a golden AR-15, incorporates AR-15s into worship ceremonies, and supports Donald Trump. https://t.co/uE939wGWuj

Trump spoke at a Unification Church event because they gave him a check with his name on it. That’s what he does. He takes money to exploit his name. That was his real estate business, it was the Apprentice, and now it’s the Moonies.