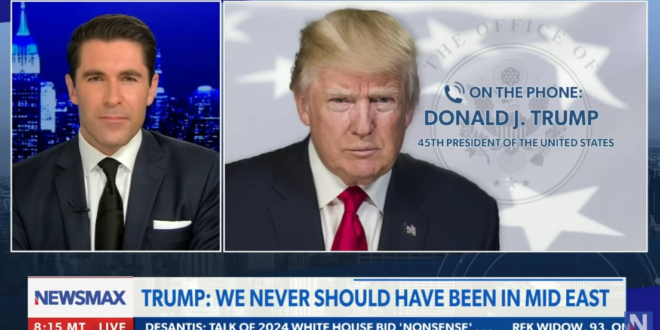 Trump told Newsmax Tuesday night that he was “down there” near the World Trade Center and helped out after the attacks, a claim he’s been making for two decades now. But while he was near the site in the days after the attack, he’s never proven that he helped — and he’s lied about charitable donations to support 9/11 victims. Trump, who plans to spend the 20th anniversary of 9/11 by calling a boxing match, went on to claim that he heard another building nearby creaking as if it might collapse.

“We were hearing creaks—I’ve never forgotten it, it was I think the United States Steel Building it was called at the time, it was 50 stories tall, and we heard creaks. I said, ‘That building is going to come down,’ and two big firemen grabbed me, and grabbed other people, and they just moved out of that area. Never came down, but I never heard a noise like that. And it was a scary situation.”

Yep, it’s that time again. Time for Donald Trump to claim he “brought a big crew of people down” to Ground Zero and personally “helped” right after 9/11.

There is absolutely no proof that any of this happened. https://t.co/qFurQo7ttq pic.twitter.com/cc9f8y5fwI

Trump appears to be adding to his 9/11 tall tales on Newsmax.

This time around he says that after he “heard creaks” coming from a building at Ground Zero, he told first responders “that building’s coming down” — prompting “two big firemen” to grab him and move him to safety. pic.twitter.com/d0ivahZR9U