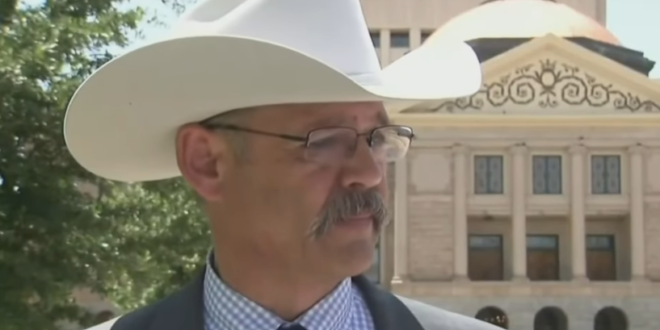 Donald Trump endorsed state Rep. Mark Finchem in the crowded Republican primary for secretary of state, throwing his support behind a candidate who one of Arizona’s most vocal proponents of the false allegations that the 2020 presidential election was rigged.

In an endorsement statement he issued on Monday, Trump called Finchem “a true warrior” and lauded him for spreading discredited fraud claims about the election. Finchem attended the Jan. 6 rally in Washington, D.C., that led to the insurrection at the U.S. Capitol by Trump supporters.

Finchem claimed he was never closer than 500 yards of the Capitol building, but footage that surfaced months later showed him walking in front of the east steps after the pro-Trump rioters breached the barricades outside of the Capitol.

Three Republican members of the Arizona Legislature, Rep. Mark Finchem, Sen. Sonny Borrelli and Rep. Leo Biasiucci are headed to Las Vegas for a QAnon convention, a gathering of the fringiest of the fringe.

The event is being sponsored by a group called Patriot Voice, with tickets for the three-day event ranging from $650 to $3,000. Former national security adviser Michael Flynn will be there, and 8kun owner Jim Watkins.

Rep. Mark Finchem, currently running for Arizona secretary of state, has sent a cease and desist letter to the group seeking to recall him from office, calling on them to destroy campaign materials that point out his connections to the Oath Keepers militia and the Jan. 6 Capitol riot.

Finchem has long been tied to the organization but in his cease and desist Kolodin states that the Oath Keepers is a “non-partisan” group and called allegations that it is anti-government to be “spurious claims.” The letter also calls the Southern Poverty Law Center’s website “hate-filled.

From a 2019 Phoenix New Times report:

Arizona Representative Mark Finchem called the white supremacist rally in Charlottesville a “Deep State” operation facilitated by the media and Democrats in a 2017 blog post on his campaign website. And although his article was riddled with misleading and false information, for Finchem, the blog post is not out of character. The Republican legislator frequently traffics in ideas common on the far-right political fringe.

He has described himself as a member of the Oath Keepers, an anti-government militia movement, and sponsored legislation that would allow Arizona to ignore U.S. Supreme Court rulings. In the August 15, 2017, blog post, Finchem denied that members of the American far-right were behind the violent “Unite the Right” rally, where one person was murdered and dozens injured by a neo-Nazi who rammed his car into a group of counter-protesters.

Such a great honor! #MAGA pic.twitter.com/W9ZsUfIlyl