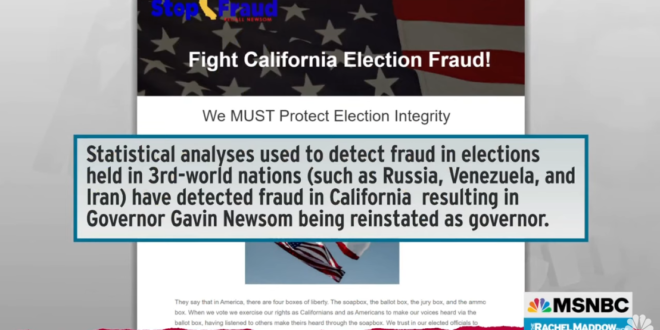 Republicans in Tuesday’s California gubernatorial recall election are already laying the groundwork to argue the election was stolen — even before a single ballot is reported or a victor declared, an increasingly common tactic in conservative circles.

Republican Larry Elder appealed on Monday to his supporters to use an online form to report fraud, which claimed it had “detected fraud” in the “results” of the California recall election “resulting in Governor Gavin Newsom being reinstated as governor.”

The only problem: On Monday when the link was live on Elder’s campaign site, the election hadn’t even happened yet. No results had been released. And Elder was still campaigning to replace Newsom as governor.

NEW: Larry Elder’s campaign is promoting a website that claims the recall is over, Newsom won, and they found voter fraud through a statistical analysis of the results.

The only problem: The election hasn’t happened yet…https://t.co/FF9Ns5n0Rz

Larry Elder has been telling supporters that Democrats are “going to cheat” and urging people to go to his website to report fraud. When you go to his website and click the “Stop Fraud” tab, you get to this page, which says it’s paid for by a committee funded by his campaign. pic.twitter.com/Aurp8CgShv

The site asks Elder supporters to sign a petition demanding a special session of CA legislature to investigate “the twisted results of this 2021 Recall Election.”

Again, the election has hasn’t happened yet.

Here’s the website, which I assume they put up prematurely (campaign did not respond to request for comment). We have screen shots if/when it gets taken down or updated.https://t.co/HjlYpGa2U0

The website affiliated with Larry Elder’s campaign also suggests voters will have to open their “ammo box” if they can’t trust elections… pic.twitter.com/4z9iSN6q1O

UPDATE: Larry Elder comms director @GZtoGhetto sends over a post-publication statement: “we believe that Larry will win on Election Day, and that whatever shenanigans there are will not stand in the way of him becoming the next governor.” https://t.co/FF9Ns5n0Rz pic.twitter.com/NLlRs7pqx6

Why is Larry doing this interview from what appears to be a rocket blasting off to space https://t.co/AF7heDgl8Z