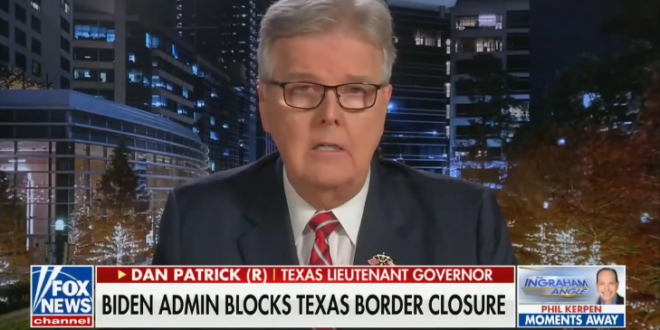 Texas Lt. Gov: Immigration Is A “Silent Revolution” That Will Take Over America “Without Firing A Shot” [VIDEO]

“When I say a revolution and has begun, they are allowing, this year, probably two million – that’s who we apprehended, and maybe another million – into this country. At least in 18 years, even if they all don’t become citizens before then and can vote, in 18 years, if every one of them has two or three children, you’re talking about millions and millions and millions of new voters.

“And they will thank the Democrats and Biden for bringing them here. Who do you think they’re gonna to vote for? This is trying to take over our country without firing a shot. That is what’s happening, Laura. This is denying us our government that’s run by our citizens with illegals who are here, who are gonna take our education, our healthcare.

“So, it’s government, it’s politics, it’s healthcare, it’s safety. Do you know how many thousands of people will die in America because of the drugs coming across the border?” – Texas Lt. Gov. Dan Patrick, last night on Ingraham’s show.

Texas Lt. Gov. Dan Patrick to Laura Ingraham: “Let me tell you something, Laura, and everyone watching. The revolution has begun. A silent revolution by the Democrat Party and Joe Biden to take over this country.” pic.twitter.com/s46Y8HW0v3