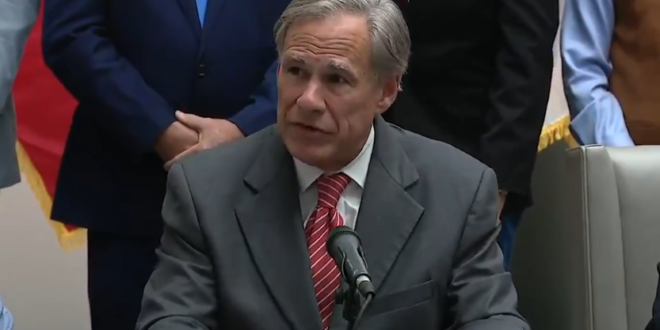 Texas Governor Greg Abbott weighed in on a burning question related to the state’s recently passed bill banning abortions after six weeks: what about victims of rape?

During a Tuesday press conference, Abbott said the law gives rape victims up to six weeks to get abortion and thusly “does not do that [force victims to have their assaulter’s child].”

“Let’s be clear: rape is a crime,” Abbott said. “And Texas will work tirelessly to make sure that we eliminate all rapists from the streets of Texas by aggressively going out and arresting them and prosecuting them and getting them off the streets.”

Texas Gov. Greg Abbott said the state will “eliminate rape” so victims won’t have to have their rapist’s baby under the state’s new abortion restrictions.https://t.co/YtsfMuw1r9

This is an incredibly bizarre statement. When asked why sex assault victims who get pregnant have to carry to term under TX law, first Abbott says they have 6 weeks to get abortion, then says he is going to eliminate rape by arresting all future rapists. pic.twitter.com/OYFH11xT1G

“There won’t be rapists’ babies delivered in Texas because Texas will arrest the rapists.”

1. But you can’t arrest a rapist until AFTER the rape; and

2. Many victims will be denied abortions; therefore

3. There WILL be rapists’ babies delivered in Texas.

Greg Abbott wants to arrest future rapists like we live in Minority Report.

Maybe we should just not let future shitty politicians run for office, too. It’d prevent people like him.

“Get rapists off the streets”
In 2019, Rep. Victoria Neave had to pass a bill to ***CROWDSOURCE DONATIONS TO HELP WITH THE RAPE KIT BACKLOG IN TEXAS***https://t.co/8wYpXhwUBP

Greg Abbott says he’s going to arrest all the rapists

How can you arrest a 1st time rapist before he rapes a woman?