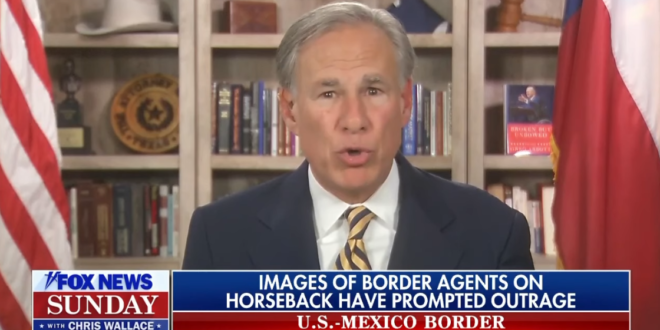 Texas Gov Vows To Hire Any Border Agents Fired For Mistreating Haitian Migrants: “You Have A Job In Texas”

Texas Gov. Greg Abbott on Sunday defended U.S. Border Patrol agents seen charging at migrants on horseback, saying he would hire them if they fear being fired. “You have a job in the state of Texas,” he told host Chris Wallace on “Fox News Sunday.” “I will hire you to help Texas secure our border.”

The Department of Homeland Security said it would launch a full investigation, and President Joe Biden said the footage shocked him. “It’s outrageous. I promise you those people will pay,” Biden said Friday.

Abbott said the fault for any misbehavior should be placed on Biden and members of his administration because they didn’t keep the Haitian migrants from crossing from Mexico into Del Rio, Texas.

Texas governor to Border Patrol agents under investigation: ‘I will hire you’ https://t.co/nug9IiQRtg

CHRIS WALLACE: Is it reasonable to say to a rape victim who might not know they’re pregnant until 6 weeks, ‘don’t worry about it, because we’re going to eliminate rape’?

GREG ABBOTT: The goal is to protect the lives of every child with a heartbeat pic.twitter.com/o7rJ5G6JZF