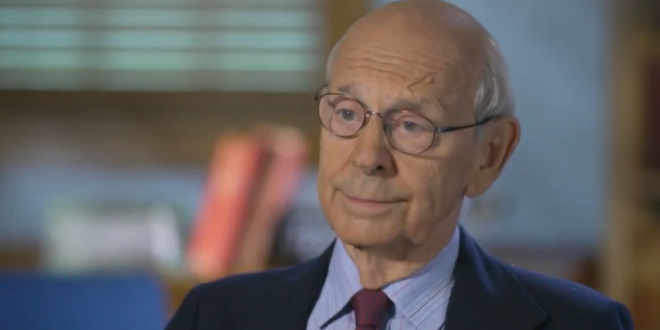 Stephen Breyer: “I Don’t Intend To Die On The Court”

Supreme Court Justice Stephen Breyer has been on something of a media blitz this past week, giving a series of well-publicized interviews about his new book, The Authority of the Court and the Peril of Politics. Today, he appeared on Fox News Sunday with Chris Wallace, where he once again disappointed Democrats by refusing to say when he might retire.

Liberals are desperately hoping the 83-year-old jurist will step down soon, while there’s a Democrat in the White House and the partly still narrowly controls the Senate. They fear that if Breyer doesn’t call it a career, he will join the late Ruth Bader Ginsburg in being replaced by an arch conservative who will undo any legacy of progress he had hoped to achieve.

“I didn’t retire because, on balance, I decided I wouldn’t retire,” Breyer said during an interview with Chris Wallace. “I don’t intend to die on the court,” he added. “I don’t think I’ll be there forever.”  At 83 years old, Breyer is the oldest justice currently serving on the Supreme Court.

He has faced calls to retire from prominent progressives who say his resignation would allow Biden to nominate his replacement during his current term in office and before the 2022 midterm elections, while Democrats still hold a slim majority in the Senate.

Supreme Court Justice Stephen Breyer on Sunday said that “many factors” will play into the timing of his retirement, suggesting that the chances of a Republican president appointing his successor is among them.

“I see the point, and probably in the background, there could be something there. There are many considerations,” Breyer said when asked if it was a factor in an interview with “Fox News Sunday.”

“I think they’re entitled to their opinion,” Breyer said about the people calling for his retirement. “Not only, they understand the political world much better than I, or they understand it pretty well.”

CHRIS WALLACE: In 2016, McConnell refused to even give Garland a hearing. In 2020, he pushed through Amy Coney Barrett in one month. Doesn’t that undercut the authority of the court?

JUSTICE BREYER: That’s the political environment. If enough people want it to change, it will pic.twitter.com/crBAVPChKM

“It is a very great privilege to be in that job and part of it is to remember that you are there for everyone.” Justice Breyer on his legacy on The Supreme Court. #FoxNewsSunday pic.twitter.com/q2sUe4NOcS

JUST NOW: “If you start changing things around, people will lose trust in the court.” Justice Breyer weighs in on the idea of packing the court. #FoxNewsSunday pic.twitter.com/N9Sm0eTkle