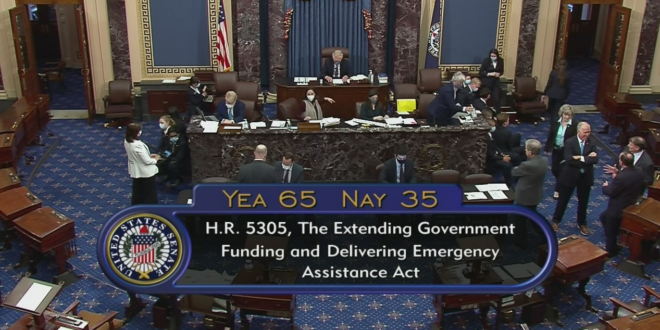 Senate Democrats and Republicans on Thursday approved a measure to fund the government into early December, putting lawmakers one step close toward staving off a shutdown that is set to occur after midnight.

The morning vote followed weeks of hand wringing between the two parties, after Democrats initially sought to move the measure along with another proposal to raise the country’s debt ceiling. Republicans blocked that effort, leaving the country’s ability to borrow unresolved just 18 days before the next major fiscal deadline.

The funding stopgap sustains federal agencies’ existing spending until December 3, at which point Congress must adopt another short-term fix, called a continuing resolution, or pass a dozen appropriations bills that fund federal agencies through the 2022 fiscal year.

Previous Fox News Guest: Masks Deprive Your Brain Of Oxygen, Are Against The Bible According To Genesis [VIDEO]
Next Macy’s Sues NYC Landlord To Block Amazon Billboard