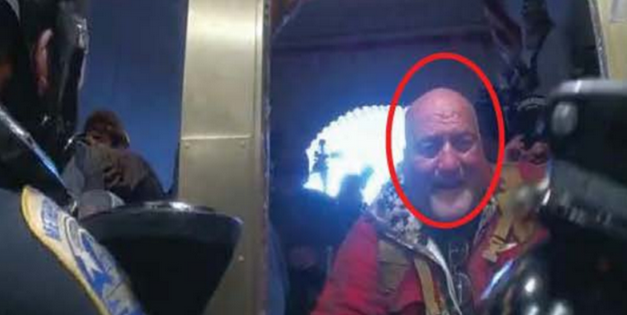 First, a February report on his arrest:

New photos and documents have been released in the case against a St. Augustine man who has been charged in relation to storming the U.S. Capitol back in January.

The indictment says video footage and photo evidence suggest that Anderson was involved in an incident in which he breached an entryway, took a police shield and then was pepper-sprayed. After being sprayed, Anderson reportedly requested emergency services and was escorted out because of asthma issues.

A St. Augustine man charged with assaulting police in the Capitol tunnel on January 6 has died while awaiting trial, his attorney said in court Friday morning.

Anderson was arrested in February and indicted a month later on eight counts in connection with the January 6 Capitol riot. Those counts included civil disorder, assaulting police, theft of government property and entering a restricted building or grounds.

John Anderson was arrested in February and indicted in March on 8 counts in connection w/ the #CapitolRiot, including assaulting police, theft of government property (a riot shield) and entering a restricted building or grounds. Charging docs here: https://t.co/O6mL362ZId pic.twitter.com/TfsPuLYjNF

“My sweet, handsome husband went home to be with the Lord,” Anderson’s wife said, according to his lawyer.

John Anderson, 61, a US military #Veteran who was charged in the Jan. 6 US Capitol breach has died. His cause of death has not been disclosed. https://t.co/ZfLINkmbTX

Previous Anti-Vax NBA Star May Be Barred From Home Games
Next Singer R. Kelly Guilty On All Counts Of Sex Trafficking