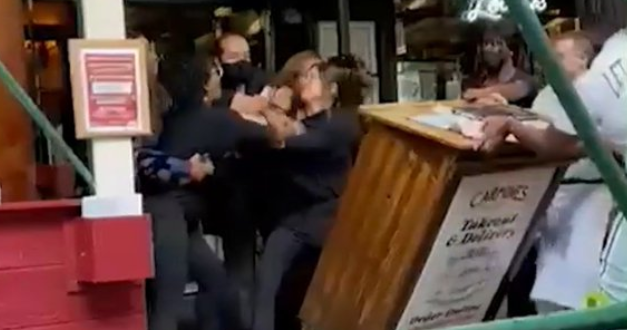 Three Texas women beat up a hostess at an Upper West Side restaurant after she questioned the legitimacy of their COVID-19 vaccination cards, police said Friday.

The violence broke out around 4:50 p.m. Thursday when the trio asked to be seated inside Carmine’s on Broadway near W. 91st St. The hostess believed their vaccine cards — a form of proof required under New York City’s latest vaccine mandate — might be bogus.

The enraged tourists punched the 24-year-old hostess repeatedly, and ripped off her necklace, cops said. She was treated at the scene but was not badly hurt.

Read the full article. The women were charged with assault.

A hostess at an Italian restaurant in Manhattan was assaulted by three tourists from Texas after she asked to see their proof of vaccination on Thursday, the police said, days after enforcement of New York City’s vaccine mandate for indoor diners began. https://t.co/sOXtLD2eEE

A hostess at a well-known NYC restaurant was sent to the hospital after she was attacked by a group of tourists from Texas when she asked to see proof of their COVID vaccination, a city requirement to dine indoors. https://t.co/v4ShCFGuen