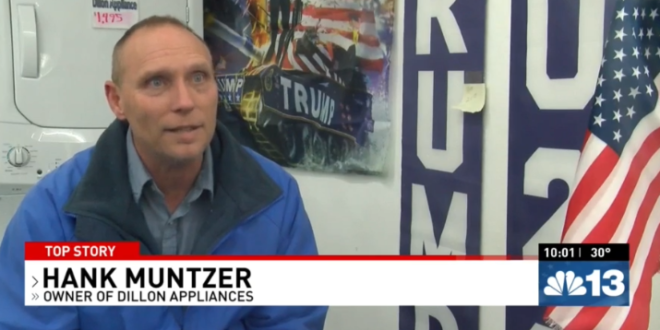 Henry Muntzer wore a T-shirt Friday imprinted with the mug shot from his arrest on insurrection-related charges. He runs Dillon Appliance on South Atlantic Street. The building’s exterior features a host of political murals and slogans, including some associated with QAnon conspiracies. One reads “Deep State Cabal” and another suggests the assassination of John F. Kennedy marked the beginning of the cabal’s malevolent dominance in American politics.

On Friday evenings, a number of pro-Trump residents of the region gather at Muntzer’s store and line up for a parade through town. They call it the “Trump Train.” During an interview before the parade, Muntzer said he anticipates beating the charges against him from Jan. 6 and then successfully filing a civil lawsuit. “Not only will I be cleared, they are going to pay me a huge premium for this,” he said.

Read the full article. Attending the most recent parade was Cowboys For Trump founder and fellow rioter Cuoy Griffin, who first earned national headlines when Trump retweeted his declaration that “the only good Democrat is a dead Democrat.”

DILLON — Couy Griffin mined his preaching background Friday night when he proclaimed to the pro-Trump crowd that he believes the former president is anointed by God. https://t.co/Oi8JrUGsnQ

Henry “Hank” Muntzer from Dillon Montana owns Dillon Appliances, which is known for a QAnon mural on the walls of his business. The walls read 1776, Trust the Plan WWG1WGA, Deep State Cabal, Mind Control Device -> Sheep No More. https://t.co/TRZiHUpdr3 pic.twitter.com/ahb0byXBkb

In an hour, I’ll be speaking with Henry ‘Hank’ Muntzer. He’s the first Montanan to be arrested after the events of Jan 6. #mtnews pic.twitter.com/rYFlRaSAI1