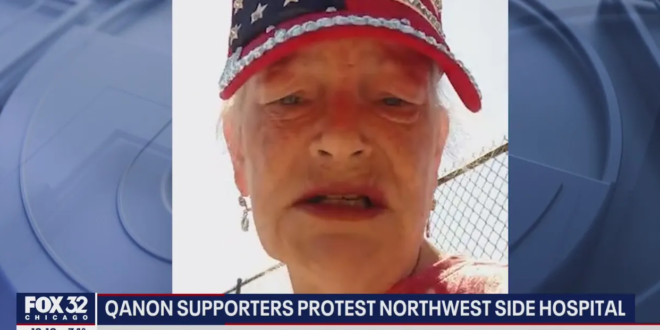 A woman who became the center of a harassment campaign against a Chicago hospital as QAnon supporters demanded they treat her COVID-19 diagnosis with ivermectin has died, according to reports.

Veronica Wolski, a popular QAnon advocate best known for hanging banners from a bridge in Chicago, died in the early hours of Monday morning after spending weeks in hospital with COVID-19.

Her death was announced on Telegram by conspiracy theorist Lin Wood, one of the biggest and most influential QAnon supporters. Wood previously urged his 814,000 Telegram followers to ring up the Amita Resurrection Hospital and demand that Wolski be treated with ivermectin instead of approved and tested drugs or vaccines.

Some of the biggest QAnon supporters urged fellow conspiracy theorists to call Amita Resurrection Hospital and urge Veronica Wolski be treated with the drug. https://t.co/z9lEBBJUkK

Anti-mask and anti-vaccine menace Veronica Wolski, whose supporters recently demanded she be treated with ivermectin while in the hospital with covid. Here is how it started, harassing Staples employees with her “mask”… pic.twitter.com/rTqqVRzBCy

… and here is how it’s going. pic.twitter.com/uhdvfVozSo