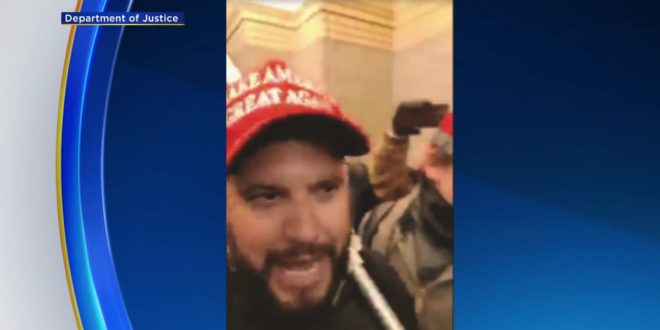 Proud Boy To Judge: My Ankle Monitor Is Embarrassing

Former Florida GOP legislative candidate Gabriel Augustin Garcia, a member of the Proud Boys militia group who was arrested over his role in the January 6 attack on the US Capitol, is asking a judge to modify the conditions of his release because his ankle monitor has been going off loudly in front of potential clients of his roofing company.

Garcia was ordered to wear the ankle monitor after he tried to bring a pocket knife to a visit with his pretrial services officer, court records show. After one rioter tried to break through a line of Capitol police in the area known as the “crypt,” Garcia yelled at officers, “You f*cking traitors! F*ck you!”

“You ain’t stopping a million,” Garcia told officers. “You ain’t gonna hold a million back today. Sorry. Ain’t holding a million of us. And there’s more! USA! Storm this shit!”

Jan 6 defendant Gabriel Garcia asks court order to remove his GPS monitor. He calls it “unsafe” and a “work hazard” and “beeping loudly around potential clients”

Prosecutors object to the motion and ask court to keep the GPS restriction. Garcia has pleaded not guilty pic.twitter.com/TjG5zZ6d0n

Apparently Gabriel Garcia was “less tha[n] forthcoming” about documenting one of his out-of-state trips. https://t.co/7T5wapljGx pic.twitter.com/kRQuXxiCPe

Good morning. 🌴💜 Miami Proud Boy Gabriel Garcia, owner of Supreme Aluminum & facing felony charges after live streaming himself inside the Capitol on Jan 6, is requesting removal of his ankle bracelet.

Just like the shady characters showing up at the anti-mask / anti-vax protests in LA, here’s two Proud Boys at the June 23 Miami School Board meeting.

The one on the right is Gabriel Garcia, currently facing charges for live-streaming his participation in the Capitol riot. 🤦🏻 https://t.co/w258ekDo83 pic.twitter.com/jaSUpLMCy8