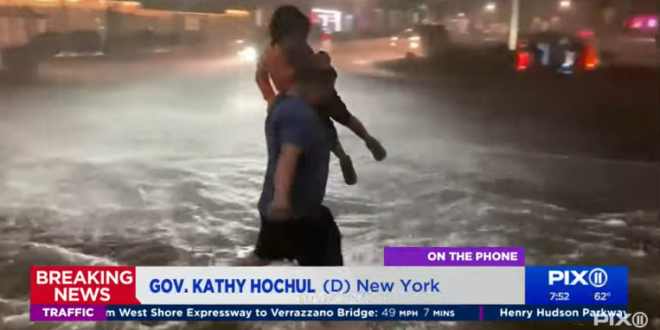 Gov. Hochul Thursday declared a state of emergency for New York City and the entire surrounding region after the remnants of Hurricane Ida spawned catastrophic rain and flooding.

“Torrential rainfall has resulted in flash flooding, power outages, travel disruptions and damage in impacted areas posing a threat to public health and safety,” Hochul said. “Stay off the roads and avoid all unnecessary travel during this time,” Hochul said.

At least eight New Yorkers, including a 2-year-old boy, were killed by the historic flooding that swept through the city and suburbs Wednesday night.

Gov. Hochul declared a state of emergency for NYC and the entire surrounding region after the remnants of Hurricane Ida spawned catastrophic rain and flooding.https://t.co/HYBwas7KAy

Unprecedented flooding in #Jamaica Queens causes side of home to cave in. Two people died inside the basement apartment according to landlord and neighbor #NBC4NY #Ida pic.twitter.com/Nv692PEKYc

In New York City, the dead ranged in age from a 2-year-old boy to an 86-year-old woman, the police said. Some drowned in basement apartments in Queens, where a system of makeshift and mostly illegally converted living spaces has sprung up. pic.twitter.com/Xs9FxQ1m5N