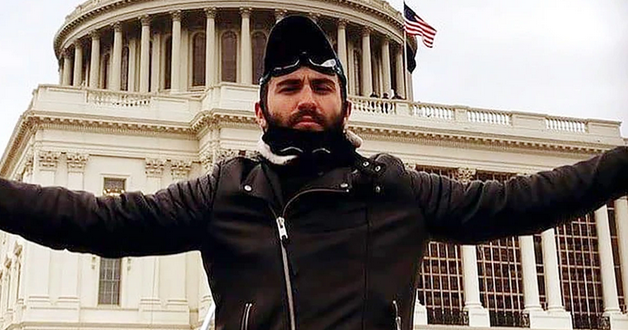 No Release For DC Rioter Who Struck Cops With Bat

Despite the man’s claims of abuse in jail and other issues, a federal judge refused Monday to order the release of a 26-year-old who fought police for over two hours during the Jan. 6 riot at the U.S. Capitol. According to video evidence, some of which the upstate New Yorker filmed himself, Edward Jacob Lang hit officers with an aluminum baseball bat and protective shields, and kicked an officer that was on the ground.

Lang says has been physically and mentally abused by guards during the ongoing solitary confinement. He says his rations have been cut in half, he hasn’t been able to exercise his right to worship, and he hasn’t been able to shave, get a haircut. Lang has also refused to get vaccinated, meaning he would need to quarantine for two weeks after if if he ever wanted to meet with his attorneys in a confidential setting face-to-face.

Despite the man’s claims of abuse in jail and other issues, a federal judge refused to order the release of a 26-year-old who fought police for over two hours during the Jan. 6 riot at the U.S. Capitol. https://t.co/oXqM6DbN0G @samhawk81

A lawyer representing alleged MAGA rioter Edward Jacob Lang struggled in court after a judge got him to admit that his client was caught on camera swinging around a riot shield taken from Capitol Police.https://t.co/AfhwCw6oRD

*Police arrest Edward Jacob Lang of Newburgh, NY, in connection with Capitol riot.
*No charges announced.
*Lang, 26, posted photos on social media, including one that said: “This is me.”
*Smart guy.https://t.co/nv2ItyuFxf pic.twitter.com/p4FBHHGa7j

ARRESTED: Edward Jacob Lang, 25, from Hudson Valley witnessed the death of Rosanne Boyland, a 34-year-old Trump supporter who was crushed to death as a the MAGA mob surged against the police. pic.twitter.com/d03RsVotcb

Docs: Edward Jacob Lang posted this of himself holding up a police riot shield with the words “THIS IS ME” on Instagram.

He’s charged with assaulting officers and 3 other crimes.

Asked “So what do you think happens next,” Lang allegedly told a livestreamer: “Guns…That’s it.” pic.twitter.com/ItGI7fdzIn

Previous Clapton Breaks Own Vow, Plays Proof-Of-Vax Venue
Next Florida Restaurant Owner To Defy Federal Vax Mandate Because “I Believe God Told Me Not To Take This Vax”