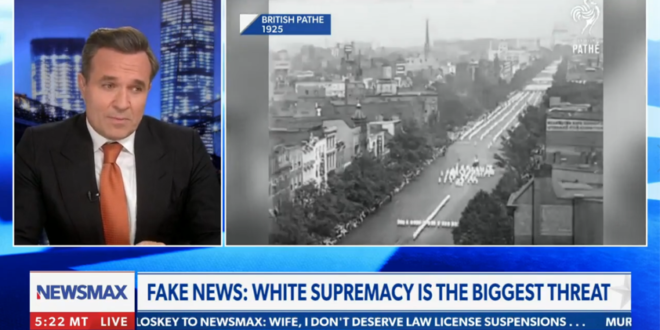 “So much white supremacy coming our way. White supremacy is a existential threat to America. Democrats all over the place have been saying this, basically since Donald Trump showed up.

“So it’s just a left-wing talking point. None of that’s true. None of that is true. Now we went looking for this white supremacy stuff that they’re talking about, right?

“The violence and the danger that’s posed? We actually did find some evidence from 1923. This is the last substantial turnout we could see or we could find of white supremacy. Look, it’s a boogeyman, it’s a false boogeyman.” – Newsmax host Greg Kelly.

Previous Anti-Mandates Libertarian Official Dies Of Something
Next Mary Trump: Junior Is My “Stupidest” Relative