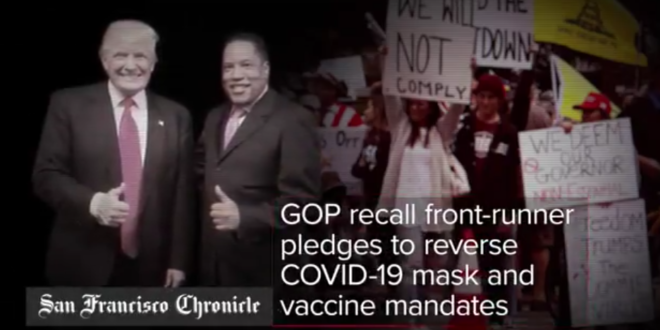 Former President Barack Obama urges Californians to reject the recall effort targeting Democratic Gov. Gavin Newsom in a television ad released on Wednesday, telling voters that the outcome of Tuesday’s recall election could be the difference “between protecting our kids and putting them at risk.”

“You’ve got a big choice to make by September 14. Governor Newsom has spent the past year and a half protecting California communities. Now Republicans are trying to recall him from office and overturn common-sense Covid safety measures for health care workers and school staff,” Obama says, with an image of Larry Elder, Newsom’s leading Republican opponent, and former President Donald Trump flashing on the screen.

Barack Obama tells voters that the outcome of Tuesday’s recall election could be the difference “between protecting our kids and putting them at risk” in a new ad.

Obama is the latest top Democrat to come to Newsom’s defense.

Big news: @BarackObama is urging Californians to vote NO on the Republican recall in a new ad.

Find your ballot and vote NO by September 14th. pic.twitter.com/FUBrqSVZ2I

Previous Conway To Biden: “I’m Not Resigning, But You Should”
Next Macy’s Thanksgiving Day Parade To Return [VIDEO]