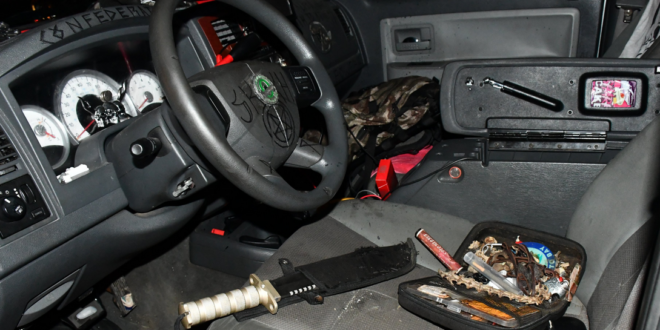 A California man, who had a bayonet and machete with him, was arrested near Democratic National Committee headquarters in Washington, authorities said Monday. Donald Craighead, a 44-year-old resident of Oceanside, was booked on suspicion of possession of prohibited weapons, U.S. Capitol Police said.

Craighead’s Dodge Dakota pickup truck, decorated with a swastika and other white supremacist symbols, was spotted near DNC headquarters at around midnight, authorities said. The truck did not have a license plate, but instead had the picture of an American flag where the plate should have been, officials said.

The far right-wing radical claimed he was “on patrol” in his pickup truck emblazoned with Nazi regalia when police pulled him over. He started spewing white nationalist propaganda to the officers.

Police say they don’t know whether Craighead came to Washington D.C. to attend Thursday’s planned rally supporting his fellow radicals who were arrested for storming the Capitol on Jan. 6. Congressional leaders and police say they are raising security ahead of this week’s rally.

Security officials were woefully unprepared to cope with the crowd of violent extremists who overwhelmed police and marauded through the Capitol on Jan. 6 in a failed effort to block Congress from confirming President Biden’s election win.

According to Capitol Police, Craighead said he was “on patrol” and began talking about “white supremacist ideology and other rhetoric pertaining to white supremacy.” He was outside the Democratic National Committee HQ https://t.co/BQUddmU79Z

Previous Texas Gov: “We Need To Restore God To Reduce Crime”
Next Hershel Walker +70 In Georgia GOP US Senate Poll