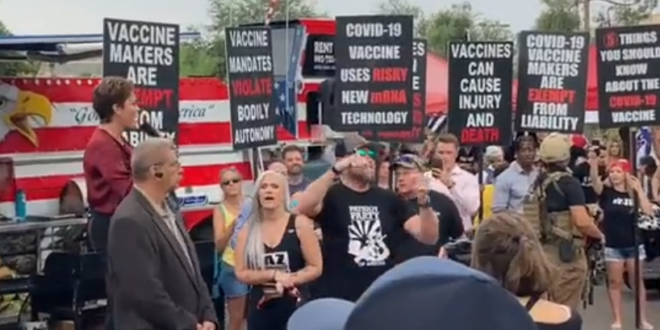 Arizona Attorney General Mark Brnovich said Friday he’s prepared to “take all necessary actions” in response to the results of the Arizona Senate’s review of the last year’s election in Maricopa County. “I will take all necessary actions that are supported by the evidence and where I have legal authority,” Brnovich, a Republican candidate for U.S. Senate in 2022, said in a press release. “Arizonans deserve to have their votes accurately counted and protected.”

Outside the Arizona State Capitol where people are gathering, not for the audit results, but for a vaccine protest.
Keep in mind, there is not vaccine mandate in AZ. pic.twitter.com/0dqgq8Rbth

I’ve seen the usual, armed militia-types.
Oath Keepers, III %’s, and Proud Boys (in street clothes because “this is not a sanctioned event.”) pic.twitter.com/lOwEVrF5HY

And of course, where there are Pro-Trump crowds – the merch people are never far away.
They’re selling quite a bit… pic.twitter.com/kJ2X0Ipval

Hundreds of people outside the Arizona state Capitol building to hear the result of election audit.

A dozen militia members armed are among the crowd. pic.twitter.com/U9oZZug5es

It’s a MAGA deplorables circus outside the AZ Capitol right now as they gear up for the big audit results. GOP Gov candidate Kari Lake attempts to give a speech, but is heckled and harassed because she won’t immediately stop her speech to sign a pledge. pic.twitter.com/eoewazJSn8

After a prayer, the pledge of allegiance, and the national anthem — it appears @AZKellyT is going to address this “Arizona Coalition for Medical Freedom” rally. pic.twitter.com/IV7IXyuqkg

.@AZKellyT just said they “will vaccinate my kids over my dead body.”
“We will not comply.”

The state senator went on to say, “if you did get the vaccine, I do not condemn you.” pic.twitter.com/5uKmStb69Q

Sen. @AZKellyT said she is hopeful Gov. @dougducey will call a special session to have the state legislature discuss both the audit & vaccines. pic.twitter.com/dqPB4qyJvJ

Republican Gubernatorial candidate @MattSalmonAZ is addressing the crowd now.
He said, “we should ask for a special session.”
Some people yell, “demand one!” pic.twitter.com/Ch7T7BtY6t

Lake, who has said she has a double digit lead in the Republican field for governor, is being protested with a mobile billboard. pic.twitter.com/sitGudHKX4

“How much resistance do you have?” pic.twitter.com/2B8uTC6D6P

This is the watch party outside the AZ Senate building.

Senate President Karen Fann just said, “it’s true that the numbers in the [leaked] draft report were close to the [initial] Maricopa numbers.”

It is quiet as people listen intently. pic.twitter.com/7HNtFesstE

Previous White Nationalists To Speak At AZ Rally For Rioters
Next Six United Staffers Sue Over Mandate, United Hits Back