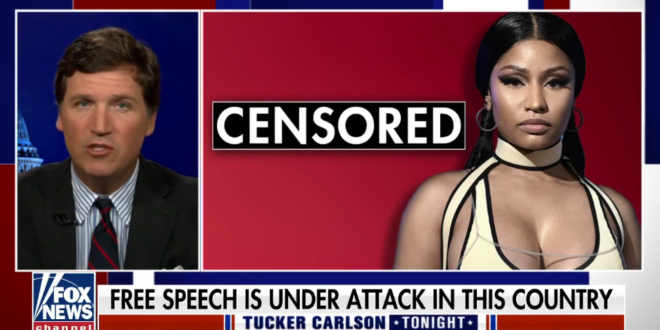 One Nicki Minaj tweet after another is being debunked this week. The pop star said Wednesday that she had been invited to 1600 Pennsylvania Avenue to discuss her recent tweets about coronavirus vaccines, but the White House responded that it had just offered her a phone call.

After she said she had been locked out of her Twitter account over the same tweets, Twitter said it had not penalized her in any way.

When she cited a secondhand story about a cousin’s friend’s testicles swollen as the result of a coronavirus vaccine, top public health officials in multiple countries said her claims were false.

And of course, last night Tucker Carlson gleefully repeated Minaj’s debunked claims and put up a chyron announcing that she was in “Twitter jail.” Carlson’s clip is below.

Ah, balls. There’s no target so pendulously tempting for a late-night monologist than a celebrity’s testicular tweet, especially when that tweet not only contains some truly ridiculous (and potentially dangerous) COVID misinformation, but is also held up for serious scrutiny by Fox News prick Tucker Carlson.

On Wednesday’s Late Show, Stephen Colbert followed up on last evening’s show-opening musical jab at the widely derided claim from singer Nicki Minaj that her absence from this week’s Met Gala was due to a vaccine hesitancy born of some ball-related side effects she claims befell her cousin’s friend in Trinidad.

The White House has invited me & I think it’s a step in the right direction. Yes, I’m going. I’ll be dressed in all pink like Legally Blonde so they know I mean business. I’ll ask questions on behalf of the ppl who have been made fun of for simply being human. #BallGate day 3 https://t.co/PSa3WcEjH3