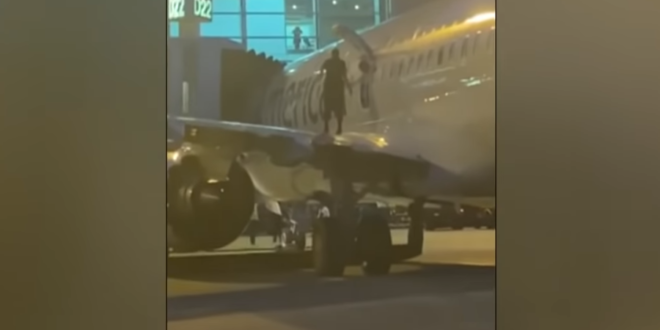 A passenger on a flight that arrived in Miami from Colombia was apprehended after exiting the plane before it reached the terminal. According to police, the passenger opened an emergency door and jumped onto the wing of the aircraft as it was pulling into its designated gate.

It happened at approximately 7:16 p.m. Wednesday. Local 10 News has learned the subject who exited the plane was 33-year-old Christian Segura, an American citizen.

The flight, which had just arrived at Miami International Airport from Cali, Colombia, was American Airlines flight 920, police said. When officers arrived, Segura jumped off the wing and was taken into custody.

JUMPED ON THE WING – A passenger on a flight that arrived in Miami from Colombia was arrested after exiting the plane before it reached the gate. https://t.co/hLcIbhpCRk

Previous Louie Gohmert: The Coordinated Attack Against Horse Paste Will Go Down As A “Crime Against Humanity”
Next Ex-French President Guilty Of Illegal Campaign Funding