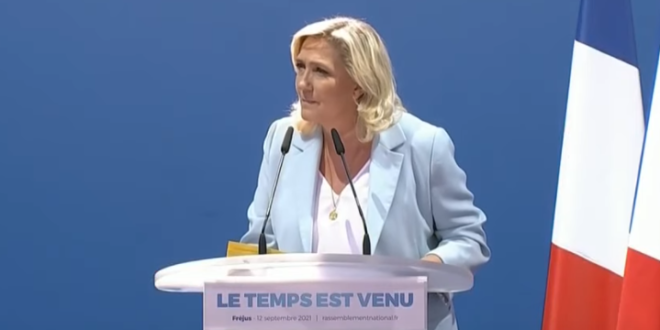 Marine Le Pen hit out at Emmanuel Macron on Sunday and sought to tamp down talk that controversial TV star Eric Zemmour is stealing her thunder on the far right as she launched her third bid for the French presidency.

Le Pen told her far-right National Rally members in the seaside town of Fréjus, southern France, that she would be the “president of French freedoms” after the COVID-19 pandemic, accusing Macron of ushering in “a society of surveillance and policing” when he imposed a pass to show proof of immunity to visit many venues in France.

Le Pen and Macron are predicted to face off in the presidential election next April, with polls currently suggesting she would lose to Macron in a run-off vote.

When a group of retired generals penned two open letters to Macron in April raising the specter of a military coup, Le Pen invited them join her movement. While saying the solution must be found in politics, she also said she agreed with their assessment.

The letters alleged that France is on the verge of civil war and “disintegration,” and were full of terms used by the far-right.

They warned of thousands of deaths unless Macron fights rising violence, radical Islam and “the hordes” who have turned multi-racial suburbs into no-go zones. They said patriotic values are scorned and anti-white racism is rampant in the country.

Although he hasn’t officially announced yet, buzz around a potential campaign from controversial TV star Eric Zemmour is stealing her thunder on the far right. https://t.co/bXZD9J9Bbh