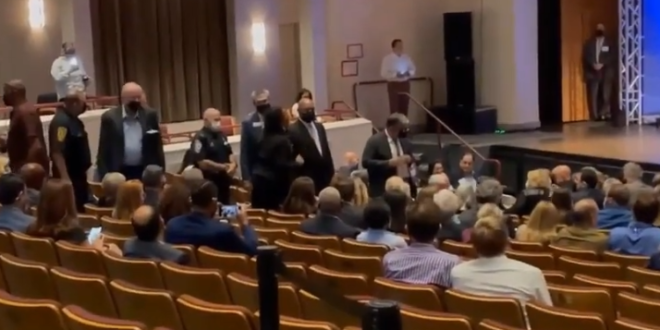 UPDATE: The first version of this post mistakenly called her a candidate for the Libertarian Party. My mistake!

Blanding, representing the Liberation Party, is on Virginia’s general election ballot alongside McAuliffe and Youngkin but was not invited on stage for Tuesday’s debate.

Several minutes into the debate, Blanding began shouting from the audience and forced the debate to pause for a full minute before moderator Chuck Todd of NBC said there would be a commercial break.

Blanding and a few of her supporters were heard yelling at McAuliffe and Youngkin within the first 20 minutes of the debate, claiming she was not able to participate because of racism and that she had been shut out of the contest.

“You are not going to win, Terry,” Blanding was heard shouting. Blanding told reporters after she left the debate hall that the censorship of her candidacy was “racist,” “sexist,” “oppressive” and “a form of voter suppression.”

“Their goal is to make sure that Virginians don’t know that I exist so that they feel they have to choose between the lesser of two evils,” Blanding said.

Previous POLL: 57% Of Republicans Back Prosecuting Rioters
Next Ingraham: Reports Of Swamped Hospitals Are Lies