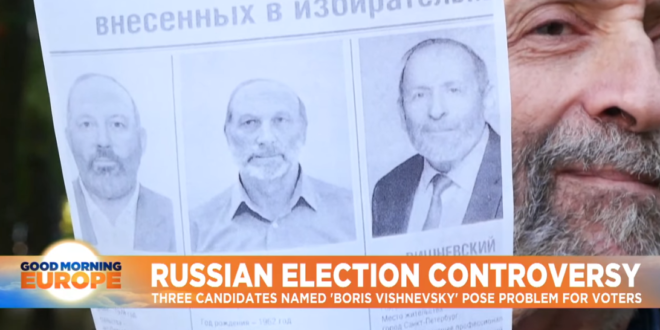 Boris Vishnevsky has been in politics for some 30 years. In that time, he thinks he’s participated in at least that many electoral campaigns. So when Vishnevsky — a central opposition figure in St. Petersburg fighting pro-Kremlin candidates — started campaigning for this year’s legislative elections, he wasn’t expecting any surprises.

Then he saw a voting poster in his district. Not only did the two candidates next to him share his name, they also had similar receding hairlines and salt-and-pepper beards. The real Boris wasn’t seeing triple: the others had changed their names and even their physical appearance to confuse opposition-leaning voters.

Read the full article. Crazy stuff and not totally unlike what Republicans pulled in Florida last year.

Previous Cawthorn: Boycott Airlines With Vaccine Mandates, We All Have A “Constitutional Right To Unrestricted Travel”
Next Palin: I’m Not Vaccinated Because “I Believe In Science”