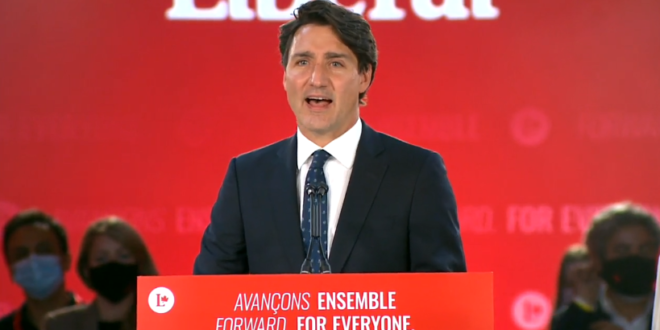 Liberal Leader Justin Trudeau has won enough seats in this 44th general election to form another minority government — with voters signalling Monday they trust the incumbent to lead Canada through the next phase of the pandemic fight by handing him a third mandate with a strong plurality.

After a 36-day campaign and a $600-million election, the final seat tally doesn’t look very different from the composition of the House of Commons when it was dissolved in early August — prompting even more questions about why a vote was called during a fourth wave of the pandemic in the first place.

“You are sending us back to work with a clear mandate to get Canada through this pandemic and to the brighter days ahead,” Trudeau said of the results which are virtually identical to those in the Parliament he voluntarily asked the governor general to dissolve in order to hold an election.

Trudeau will need to continue working with the other parties in order to govern and pass the major pieces of legislation he promised voters during the campaign. He faced criticism from opposition parties and critics over recent weeks for calling the election in the midst of the fourth wave of COVID-19.

Trudeau’s party won the election with a nearly identical number of seats this election than in 2019, meaning the Liberals lost their bet of turning their minority government into a clear majority.

But if Trudeau is at all disappointed in the result, it did not show in his speech in which he thanked his family, candidates, staffers, volunteers, and supporters for their work on the campaign.

“If you voted for our party, thank you. Thank you for putting your trust in our team to keep moving forward for everyone,” he added. “And if you did not vote for us, I want you to know that we will stand up for you and work for you every single day.