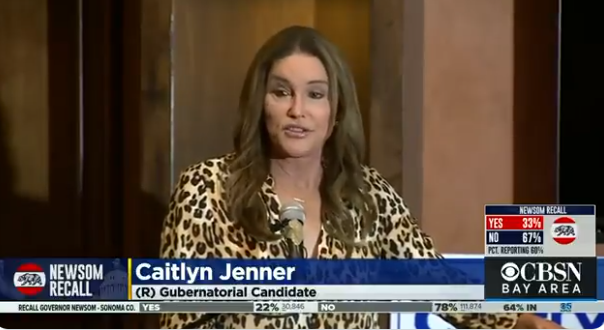 Jenner: California Gets What They Deserve [VIDEO]

Jenner, reacting to the results, expressed disappointment that Newsom had survived the recall, which was fueled by conservative anger over his handling of the COVID-19 pandemic, especially as it pertained to business closures during the first waves of the virus.

In a video shared by CBS News, the retired gold-medal Olympian was in disbelief that Newsom beat back the election challenge.

“He didn’t campaign on not one of his successes, because he doesn’t have any,” she said. “I can’t believe that this many people actually voted to keep him in office. It’s a shame, honestly, it’s a shame. You kind of get the government you deserve.”

Caitlyn Jenner, a GOP candidate in California’s recall, speaks after the vote to remove Gov. Newsom failed: “I can’t believe that this many people actually voted to keep him in office. It’s a shame.” https://t.co/cagDpkFQdS pic.twitter.com/2cONQbrtMu