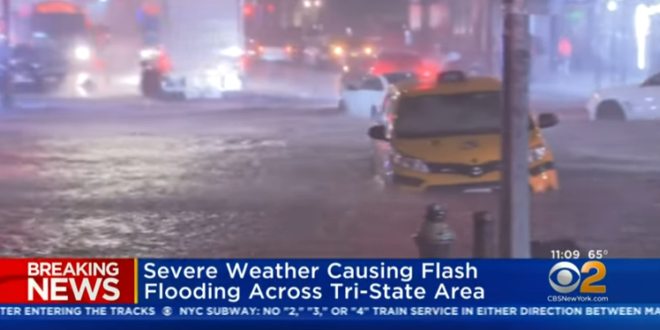 Soaking rains from the remnants of Tropical Storm Ida sparked “catastrophic” flooding in some areas around the city, sending walls of water cascading into the city’s subway system that shut it down entirely.

“This is a life-threatening situation. Seek higher ground now!” the NWS New York posted on its Twitter account. The warning was historic: “This is the first time we’ve ever had to issue one,” the weather service tweeted.

The remains of Hurricane Ida left a path of destruction in New Jersey, tearing homes to pieces. The storm swept through NYC, flooding apartments and turning streets into rivers from Park Slope to the Cross Bronx Expressway.

At least four people were killed in Brooklyn and Queens after being trapped in basements when the floodwater surged, according to law enforcement sources.

A flash flood warning was in effect for all the boroughs served by the subway through the end of the night as the remnants of Hurricane Ida barged through the city.

New York City recorded more rain on Wednesday than it normally does in a month, according to the National Weather Service, and the 3.1 inches that fell in Central Park over the course of an hour shattered a record set only last week.

At least eight deaths were reported from the flooding, seven in New York City and one in Passaic, N.J.

At Newark Liberty International Airport, 3.24 inches of rain were recorded between 8 and 9 p.m., the Weather Service said. The airport said in a statement on Twitter that it was experiencing “severe flooding,” confirming videos posted on social media that showed deep water pooling inside.

The storm also closed lanes on the New Jersey Turnpike, Garden State Parkway and on state highways as inches of rain caused street flooding up and down the state.

Police had to rescue about 200 passenger on the 9:16 p.m., Northeast CorridorLine train #3881 that was disabled in high water east of the Newark Airport station, Smith said.

Waterfall down the stairs at 145th Street station, 1 Train, in #Manhattan, #NYC. Flash #flood warnings are in effect until 11:30 pm. pic.twitter.com/pIvwWpQF1t

This looks more like a subway car wash than a subway station. This flooding has to be doing an incredible amount of damage to the NYC subway system. pic.twitter.com/bgtMbjiHvM