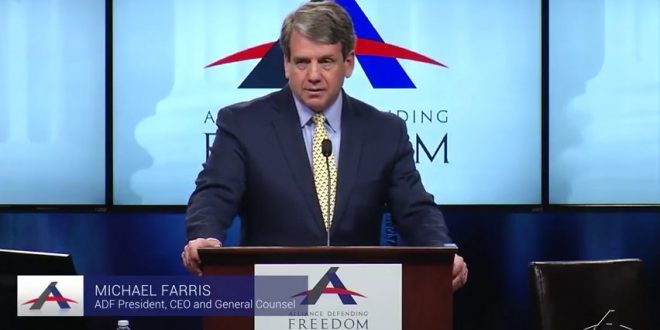 From the Alliance Defending Freedom:

Alliance Defending Freedom attorneys representing a website designer have asked the U.S. Supreme Court to review a 2-1 decision by a panel of the U.S. Court of Appeals for the 10th Circuit which concluded that the state of Colorado can force her to design and publish websites promoting messages that violate her religious beliefs. The panel majority also said that Colorado can prohibit the designer, Lorie Smith of 303 Creative, from even explaining on her company’s website which websites she can create consistent with her religious beliefs.

The 10th Circuit issued an unprecedented decision in the case, 303 Creative v. Elenis, holding that Colorado’s Anti-Discrimination Act both forced Lorie “to create websites—and thus, speech—that [she] would otherwise refuse,” and also created a “substantial risk” of removing “certain ideas or viewpoints from the public dialogue,” including Lorie’s beliefs about marriage. Despite that, the 10th Circuit said it’s fine for the law to compel Lorie to speak messages with which she disagrees because she created “custom and unique” expression.

The lawsuit contends that Colorado Revised Statute § 24-34-601(2)(a) violates the First Amendment’s Free Speech and Free Exercise clauses. The state law is the same one the commission twice used against Masterpiece Cakeshop cake artist Jack Phillips, who is currently being harassed by an activist attorney in a third lawsuit that also attempts to use Colorado’s law against him. After a trial resulted in a decision against Phillips, ADF attorneys representing him and his shop have appealed that case to the Colorado Court of Appeals.

As I reported when this suit was first filed back in 2016, it’s likely that Smith’s is yet another fake company created by the ADF in order file a “peremptory challenge.” In other words, she’s never refused any LGBT clients because she’s never had any attempt to hire her.

Previous Delta Asks Other Airlines To Share Their No-Fly Lists
Next Arizona Gov: “The 2020 Election In Arizona Is Over”