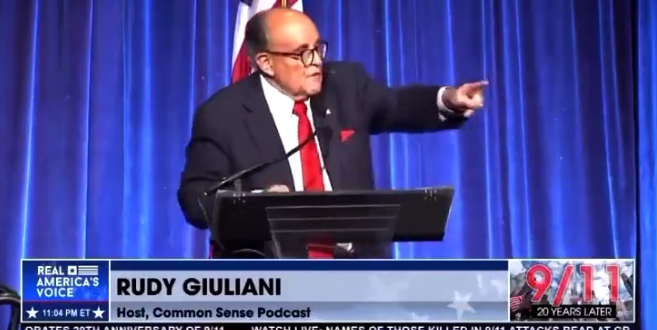 Giuliani Denies Being Shitfaced During 9/11 Speech

“I am not a drunk. I don’t think I’ve ever [been] publicly drunk in my life. The last time I was – was probably in college. I like to drink Scotch and have cigars. That’s where it probably comes from.

“I drink moderate amounts of Scotch. I mostly drink Scotch because I like to have it with cigars. I didn’t have a cigar last night. And this is a caricature that the left is trying to put on me.

“I can’t remember the last time that I was drunk. And I’m not just going to put up with it anymore. I’ve got to do something about it. It hurts my reputation for someone to say I’m drunk.

“And this is a concerted attempt to do this. I’m willing to be criticized for what’s true. I’m sure as hell not going to be characterized as a drunk, which I’m not.” – Rudy Giuliani, speaking to the Daily Mail.

Rudy rolled into the 9/11 dinner drunk out of his mind tonight. Here he is giving his Queen Elisabeth impression, and assuring the audience he was never with a young girl and Prince Andrew. pic.twitter.com/U40YSzS34X

I’m not sure I have ever seen someone give a speech at a formal occasion as drunk as Rudy Giuliani is right now at the 9/11 dinner. pic.twitter.com/54G5oCuBe3

The smear campaign against @RudyGiuliani by the @nypost and @MailOnline is outrageous, and there are about 150 people that were in that room the would attest that he was stone sober.

A joke, or denouncing an incompetent or corrupt government doesn’t mean someone’s drunk.