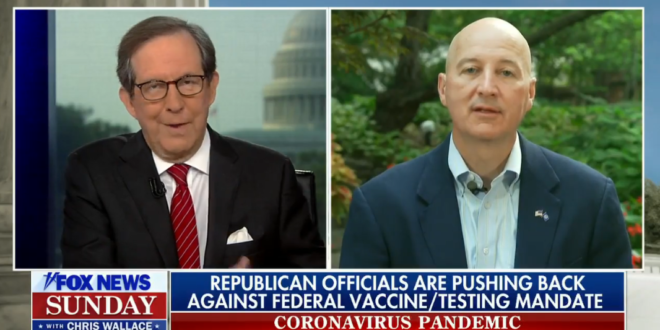 Fox News anchor Chris Wallace confronted Nebraska Governor Pete Ricketts over the latter’s opposition to President Joe Biden’s COVID-19 vaccine mandates—questioning the Republican about why he views the commander-in-chief’s orders differently than requirements for students in Nebraska to receive a number of vaccinations before enrolling in school.

Ricketts was one of a number of GOP governors to condemn Biden’s decision, which is estimated to directly impact about 100 million American workers. The Republican leader last week said that Biden “thinks we live in the Soviet Union,” slamming the decision from the White House.

Wallace pointed out that Nebraska requires all children to get vaccines for “a number of diseases” to attend school.

“They must be vaccinated against diptheria, tetanus and pertussis; polio; measles, mumps, and rubella; Hepatitis B; chicken pox. Why are those mandates that parents in your state must comply with and do comply with routinely — why is it that they’re not so objectionable and such a violation of personal freedom but Biden’s vaccine mandates are?”

Ricketts responded by saying “there’s a long history” with those other shots and said many Americans “don’t know what to trust.” The governor added, “This is very different from polio that has very devastating effects.”

CHRIS WALLACE: To attend school in Nebraska, kids need to have all sorts of vaccinations. Why should Covid be different?

WALLACE: It has FDA approval pic.twitter.com/LXLJ2bJMUY

Previous New York Hospital To Stop Delivering Babies Because Too Many Anti-Vax Staffers Have Quit Over Mandates
Next Stephen Breyer: “I Don’t Intend To Die On The Court”