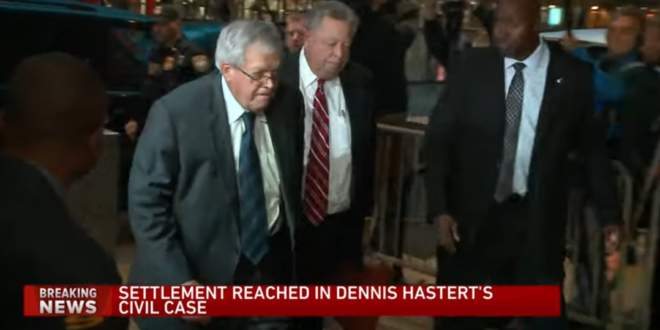 Former U.S. House Speaker Dennis Hastert has reached a tentative settlement over payments to a man who accused him of child sexual abuse. The man, referred to only as James Doe in filings, brought the breach-of-contract lawsuit in 2016 in a bid to force Hastert to pay the unpaid balance of the hush money, nearly $2 million. Hastert’s lawyers said the 2010 deal was void after Doe spoke about it to others.

The roughly $1.5 million Hastert did pay over four years in $50,000 cash installments prompted a criminal investigation in 2014. Hastert’s methods for structuring the cash withdrawals so they wouldn’t be flagged tipped off the FBI, initiating the probe and eventually making his abuse of Doe and others public. Hastert stopped making payments after FBI agents questioned him.

Read the full article. Hastert was released from federal prison in 2017 after serving a 15-month sentence.