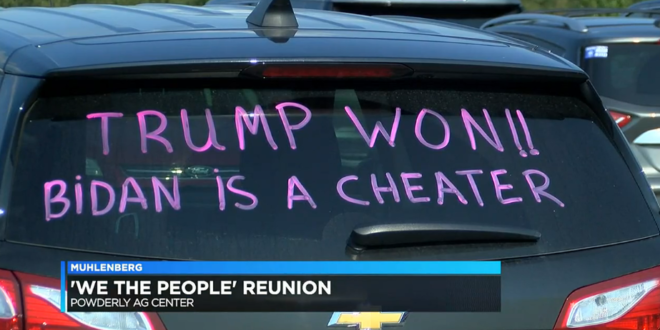 The “We the People Reunion,” a conservative rally, began in Muhlenberg County on Friday. The event is hosting speakers such as the CEO of MyPillow, Mike Lindell, former national security advisor Michael Flynn and Pastor Greg Locke, who has in the past admitted to being at the Capitol during the January 6 Capitol riot.

The rally began at the Muhlenberg County Agriculture and Convention Center. Promoters said they expected crowds of around 10,000 people. Fewer than 300 were at the event when 14 News arrived. 14 News was allowed in the parking lot to shoot some video, but was later asked to leave the fairgrounds.

Event organizers said they expected to have over 10,000 people at the KY Fairgrounds for a rally with Michael Flynn, Mike Lindell and Pastor Greg Locke today. Fewer than 300 showed up. pic.twitter.com/iSZPOE3GBb

What a LIE!! They never said a thing about 10,000. They sold over 1,200 tickets. That’s exactly what they expected and that’s exactly how many people showed up. Stop being such ignorantly blind media followers.

It was promoted as “The Biggest Patriot Rally of the Year.” There were more people at my local high school soccer game. pic.twitter.com/RSxc5A4DNE

Hundreds gather for ‘We The People’ rally in Muhlenberg Co. https://t.co/KjaQmzaFHF