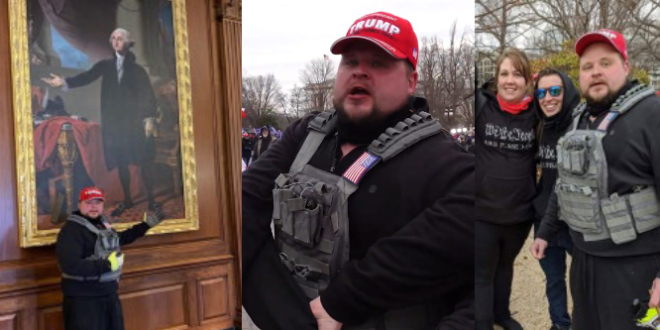 Joining more than 180 others charged with assaulting law enforcement on Jan. 6, a Kansas man stands accused of pushing a U.S. Capitol police officer with “aggressive force” and causing the cop to fall down a small flight of stairs. Monday’s arrest affidavit alleges that surveillance footage captured the incident.

Eckerman, 37, wearing a “load bearing tactical vest and red Trump hat,” appeared to emulate Washington’s gesture in a photograph in front of the painting that he posted on Facebook, which authorities say two tipsters passed on to them.

US Justice Dept has announced charges against Michael Eckerman of Kansas. He’s accused of pushing his way toward front of mob toward police line, later saying “these motherf**** are traitors” pic.twitter.com/2uXzrBAQO2

The FBI arrested Michael Eckerman, who was identified by a former high school classmate in Kansas. The feds say he appeared to pushed a Capitol Police officer, causing them to fall down a small set of stairs before someone else sprayed them in the face with a fire extinguisher. pic.twitter.com/gzthDzOZZm