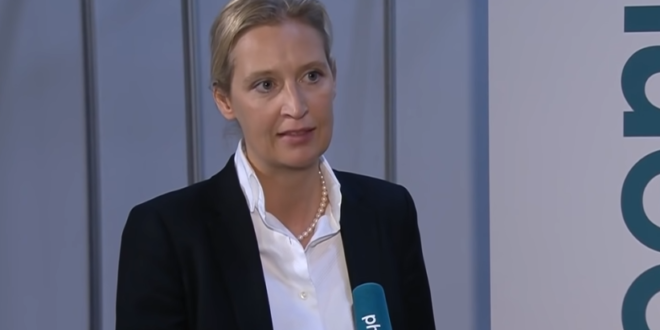 Flanked by campaign posters promising a return to “normality,” Alice Weidel, a lead election candidate for Germany’s far-right group, railed against coronavirus lockdowns and what she said was “discrimination” against the unvaccinated. Then she moved on to vaccinations for kids.

“Hands off our children,” she said to cheers in Görlitz, Germany’s most eastern city. The crowd had gathered for one of the last campaign events of the Alternative for Germany party, or AfD, ahead of national elections Sunday. The vote will set Germany on a new course after 16 years with Angela Merkel as leader.

The anti-lockdown, anti-vaccination mandate message is a new rallying cry for the AfD, which became the country’s third-largest political force when it won 13 percent of the vote in the country’s last parliamentary elections in 2017.

RELATED: As I reported back in 2017, Alice Weidel is openly gay. She and her partner have two adopted children. Also in 2017, her far-right party published “death notices” for the German family and vowed to sue to stop marriage equality. In 2018, a Berlin court ordered her party to retract its claim that Angela Merkel’s administration had donated millions to Hillary Clinton’s campaign in 2016. Although her party is vehemently anti-immigrant, Weidel has been accused of illegally employing a Syrian housekeeper. She calls that charge “fake news.”