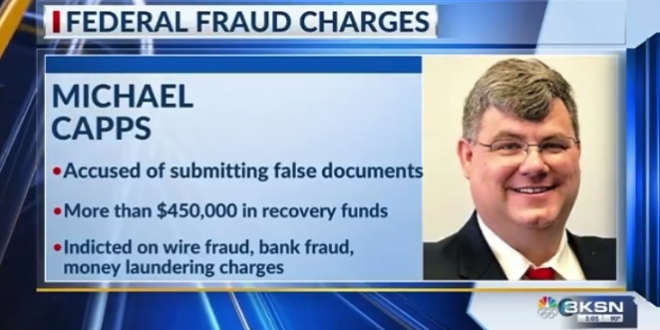 The indictment follows a Wichita Eagle investigation into the federal aid Capps’ businesses and a nonprofit under his control received from the Small Business Administration, the state of Kansas and Sedgwick County.

An indictment filed by the United States Attorney’s Office for the District of Kansas says Capps bilked federal, state and local agencies for more than $450,000 in COVID-19 business recovery funds.

From a January 2020 Associated Press report:

Conservative Republicans are pushing for a law requiring government buildings and schools across Kansas to post the national motto of “In God We Trust,” an idea critics say is part of a broader effort by the Christian right to promote their religious beliefs in public life.

Kansas state Rep. Michael Capps, the Wichita Republican and the bill’s lead sponsor, said the motto should be displayed to acknowledge the nation’s “history and founding principles.”

From a 2018 Topeka Capital-Journal report:

A Republican Kansas House member from Wichita rejected a state agency’s determination that he emotionally abused boys in foster care and rebuffed bipartisan demands to resign from office and withdraw from the general election.

Republican Rep. Michael Capps, who was appointed in July to replace a GOP legislator who chose not to complete his term, said Friday that he rejected conclusions of an abuse investigation by the Kansas Department for Children and Families.

The agency indicated Capps engaged in improper behavior with children in foster care while serving as a volunteer court-appointed advocate in Sedgwick County.

Former KS GOP State Rep. Michael Capps has just been indicted by a federal grand jury for 19 counts of wire and bank fraud, and money laundering. He allegedly embezzled over $450,000 in covid relief money from the govt. pic.twitter.com/pMKo4av9ZY